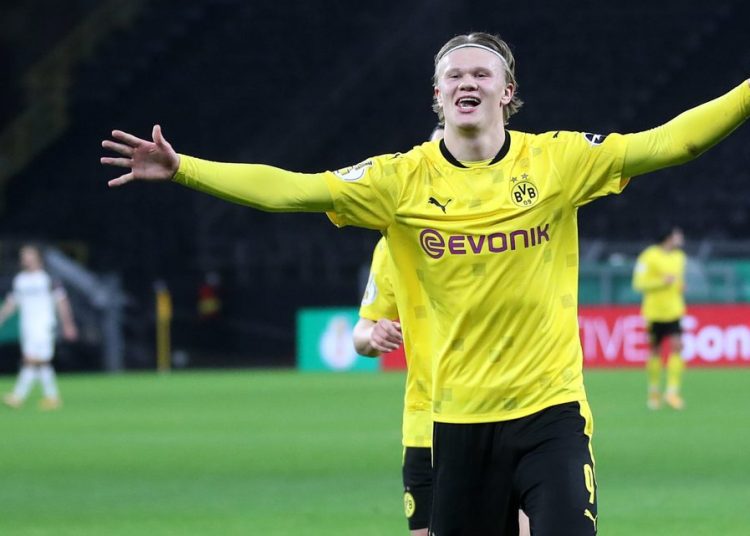 DORTMUND, GERMANY - FEBRUARY 02: Erling Haaland of Borussia Dortmund celebrates after scoring their side's third goal during the DFB Cup Round of Sixteen match between Borussia Dortmund and SC Paderborn 07 at Signal Iduna Park on February 02, 2021 in Dortmund, Germany. Sporting stadiums around Germany remain under strict restrictions due to the Coronavirus Pandemic as Government social distancing laws prohibit fans inside venues resulting in games being played behind closed doors. (Photo by Friedemann Vogel - Pool/Getty Images)

Erling Braut Haaland scored an extra-time winner as Borussia Dortmund edged past second-tier Paderborn in the third round of the German Cup.

But goals from Julian Justvan and a Prince Osei Owusu penalty – which came deep in stoppage time after a VAR review – levelled the tie.

However, 20-year-old Haaland then settled the contest after another VAR review.

The Norwegian has now scored 22 goals in 21 games for Dortmund this term, although he thought that he had sealed their victory much earlier.

But in a remarkable turn of events his goal in the fifth minute of added time was chalked off after a VAR review for an earlier foul in the Dortmund area, which then led to Paderborn’s penalty.

The result means that Dortmund have won their last 26 cup matches against opposition from below the Bundesliga.