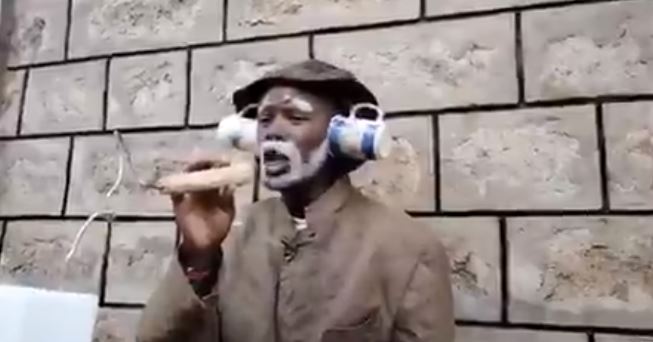 An unidentified boy has flawlessly recreated what is perhaps the best football commentary of all time.

Peter Drury’s commentary after Kostas Manolas scored Roma’s third goal on the night has gone down in football folklore with many fans claiming it is one of the best pieces of commentary ever broadcast.

FC Barcelona had 4-1 advantage prior to the reverse UEFA Champions League game and indeed, the unthinkable happened to the Spanish giants who succumbed to a 3-0 defeat in Rome.

“Roma have risen from their ruins! Manolas, the Greek God in Rome! The unthinkable unfolds before our eyes. This was not meant to happen, this could not happen… this is happening!”, an overwhelmed Peter Drury exclaimed the famous lines.

Many fans have tried to replicate this moment of spontaneity by the 53-year-old Britton commentator.

Of all the attempts, this video by an unknown African young lad comes close to perfection.

This young lad clad himself with mugs to his ears and white-painted beard and eyebrows and speaks through the corn.

This video caught the attention of Peter Drury’s sidekick, Jim Beglin, who shared the famous moment with him on that cold night in Rome.

"It was unprofessional": David Accam details how he was dropped from 2014 World Cup squad