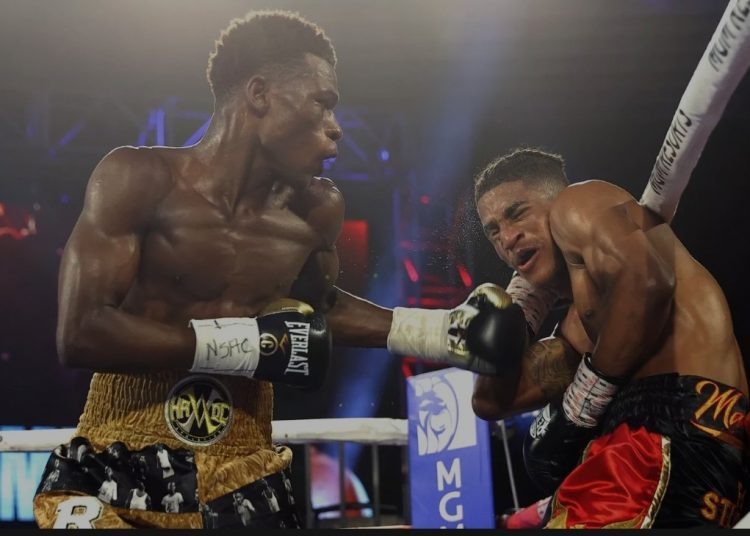 Richard Commey sent a reminder to the lightweight division that there is still plenty of fight left in him.

The 33-year old Ghana native enjoyed a celebrated return to the ring after a 14-month break, knocking out Jackson Marinez in the 6th round of their main event Saturday evening at MGM Grand Conference Center in Las Vegas.

Commey scored two knockdowns, the latter of the two prompted an immediate stoppage at 2:35 of round six.

Commey has been out of the ring since his IBF lightweight title reign came to an unceremonious close in a 2nd round knockout to Teofimo Lopez in Dec. 2019. The ongoing coronavirus pandemic kept him out of the ring for all of 2020, only to watch Lopez further unify the 135-pound division following a 12-round unanimous decision win over Vasiliy Lomachenko in their World lightweight championship clash last October. 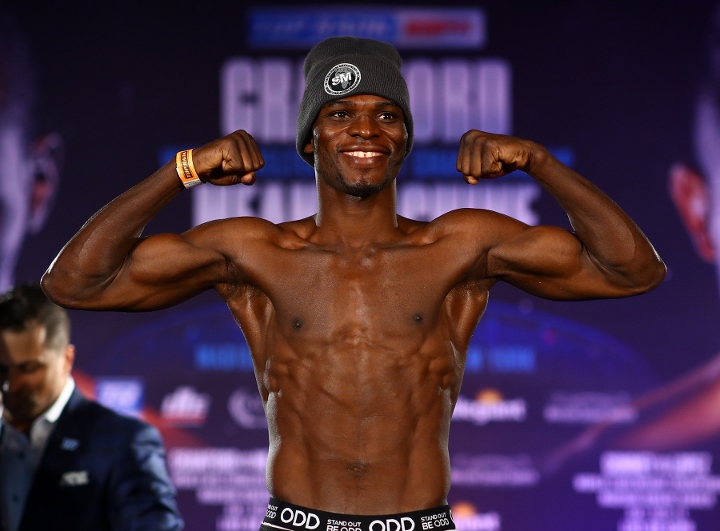 The unbeaten Brooklyn-bred champion took the time to lend his support to his old ring rival, which clearly resonated with Saturday’s winner.

“Aside from the ring wars, in life you should show love to one another,” Commey told ESPN’s Bernardo Osuna after the bout. “He always liked me, and it’s pure love. For him to come down to my corner, it was motivating. It showed tremendous love, and that’s how it’s supposed to be.”

Commey controlled the ring in round one, pushing around Marinez with his jab and smothering the Dominican lightweight whenever the fight made its way to the ropes. Marinez managed to time a telegraphed right hand by Commey, catching the former lightweight titlist with one of his own.

Round two saw Commey take an aggressive approach, landing a right hand over Marinez’s jab. Marinez adjusted, landing right hands and seemingly pleased with his work as he banged his gloves in celebratory fashion at round’s end.

Marinez looked to work his jab in round three, only to get clipped with right hands in back-to-back exchanges. Commey found his groove and began to outwork his foe for the first time in the fight. Marinez concentrated more on movement in the back half of the round, which Commey exploited with power shots once able to work his way inside.

Referee Kenny Bayless issued a warning to Marinez for holding at the start of round four. Commey effectively cut of the ring, minimizing his opponent’s movement and throwing right hands and left hooks with knockout intentions.

Commey stood at center ring, allowing Marinez to walk inside before catching him with a right hand in round five. Marinez took the shot well, outboxing the former champ over the course of the rest of the round as Commey continued to make the same mistake of dropping his left hand.

The tide turned at the start of round six, as Commey briefly stunned Marinez with a compact right hand. Marinez found himself under siege, wading through a combination but forced to limp away after getting caught with a low blow which went undetected by the referee. Commey went on the attack, forcing Marinez to the ropes. His pressure would pay off, flooring Marinez with a right hand inside of the final minute.

Marinez beat the count, only to be deposited to the canvas by another right hand which promptly ended the fight. Marinez (19-2, 7KOs) suffers his second straight defeat, though this one without dispute unlike his questionable 12-round unanimous decision defeat to Rolando ‘Rolly’ Romero last August.

Another angle of the knockout

Commey was ahead 49-46 and 48-47 on two scorecards and trailing 48-47 on the third at the time of the stoppage. His potent right hand made the cards moot, as he returns to the win column for the first time in 22 months in improving to 30-3 (27KOs). It took a couple of rounds to figure out how to get there, though the finish is all that will be remembered in the grand scheme of things.

“I didn’t get my rhythm right in the first two rounds,” admitted Commey. “I settled down and caught him.

Commey won the vacant IBF lightweight title following a 2nd round knockout of Isa Chaniev in Feb. 2019. His lone successful defense came four months later, stopping former champ Rey Beltran in the 8th round of their June 2019 clash before conceding the belt to Lopez by year’s end.

Saturday’s win keeps his name in the mix in what is now a lucrative lightweight division. There is a chance that he could fight for a title by year’s end, likely in a vacant title fight once Lopez moves up to junior welterweight.