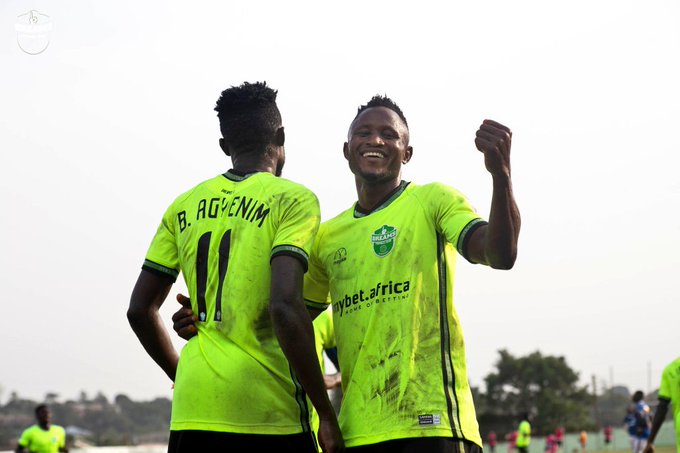 Dreams FC extended their unbeaten run in the Ghana Premier League to 8 games after a thumping 4-2 win over Aduana Stars on Sunday.

A brace from Joseph Esso gave Vladislav Viric’s men a commanding 2-0 lead heading to half time.

Bright Adjei halved the deficit on the hour mark for Aduana Stars before Adjenim Boateng Mensah and Emmanuel Ocran scored in quick succession to put the game beyond Paa Kwesi Fabin’s men.

The win takes Dreams up to 3rd on the league table, level on points with second place Asante Kotoko (who did not play this weekend because of their involvement in the CAF Confederation Cup) and just 2 points off league leaders Karela United.

Karela moved back to the summit of the table with a hard-fought 2-1 win away in Cape Coast.

Diawusie Taylor and Umar Bashiru’s first half goals set Evans Adotey’s men off to a wonderful start, before Dwarfs staged a spirited fight back that only resulted in an 83rd minute consolation goal from Benjamin Acquah as Karela held on for the win.

In Tarkwa, Justice Blay scored a penalty and Bright Enchil added a second to hand Medeama a 2-0 win over Bechem United.

The defeat is the 3rd successive one for Ignatius Osei Fosu’s men, who have failed to score in each of those games.

In Dansoman, Hashmin Musah scored in the 95th minute to rescue a point for Inter Allies in a 2-2 draw with Liberty Professionals.

Allies had gone ahead in the first half through Suleman Nafiu but Stanley Ampaw and Abraham Wayo scored in the second half to swing the advantage in Liberty’s favor but Musah popped up late to deny Liberty the win and give Allies their first point in 7 games, having lost all of their previous 6.

Ashgold are now without a win in their last 6 games.

Hearts of Oak, who were meant to play Asante Kotoko this weekend, were not in action.

Legon Cities host King Faisal on Monday and Great Olympics vs Elmina Sharks is on Tuesday.