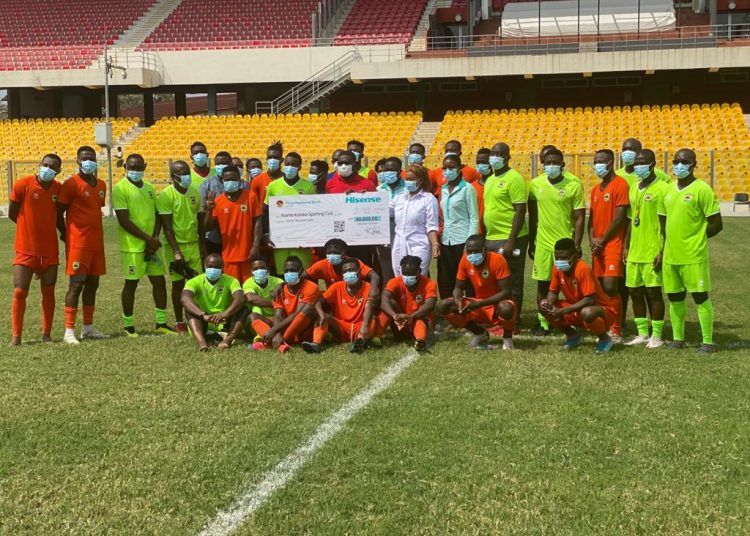 Hisense has fulfilled its pledge of C40, 000 to Asante Kotoko as well as to scorers against the Porcupine Warriors in the top flight league.

On Saturday, Hisense officials and brand ambassador, Nana Ama McBrown called on the team during their training session ahead of their CAF Confederations Cup tie against ES Setif for the presentation ceremony at the Accra Stadium.
The 40,000 donation was in fulfillment of the club’s eight-match clean sheet promise.

The Hisense brand ambassador said “This is a token aimed at urging you on to keep more clean sheets.”
Kotoko captain Felix Annan expressed gross appreciation to Hisense for the gesture saying, “This will certainly urge us on to go the extra mile. We are most grateful to Hisense.”
The home appliances giants has also introduced a financial scheme which rewards players who score against Kotoko.

The scheme forms part of Hisense’s support for football as well as encourage footballers in the country.
Few weeks ago, Hisense presented cheques to two players – Samuel Bioh and Michael Yeboah of Aduana Stars and Great Olympics respectively.
Each player received C5,000 for their efforts.
In separate post-presentation interviews, Yeboah said “This will urge me on to score more. Initially l doubted Hisense, but they have demonstrated that they are can be trusted.”
In like manner, Bioh sated “I am grateful to Hisense for the kind gesture. I didn’t believe they will honor their words, but look at me today with the cheque for C5, 000.”
Officials of Hisense after the presentation said the scheme was aimed at encouraging competition among clubs.”
They have pledged to reward prospective scorers in subsequent matches.