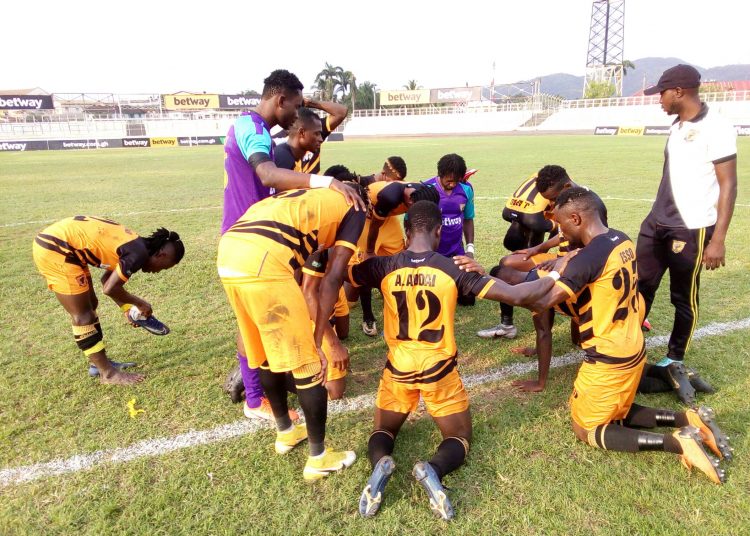 AshantiGold returned to winning ways as they recorded an impressive 4-0 win over Aduana Stars in match week 15 of the Ghana Premier League at the Obuasi Len Clay stadium on Friday afternoon.

The Obuasi-based side had gone six matches without a win, picking only three points from a possible 18 points but they experienced a more positive return on Friday.

A brace from David Abagna and a goal each from Frank Akoto and Yaw Annor ensured that the Miners picked up all three points at home and move them to 6th place on the league log.

Akoto opened the scoring for the hosts through a penalty in the 24th minute following a handball inside the 18-yard box of Aduana Stars. Yaw Annor then doubled their lead in the 29th minute to leave them in control at half time.

AshantiGold returned from the break eager to do more damage to the Aduana Stars defense but they almost gave a goal away in the 57th had it not been for Kwadwo Amoako’s timely goal line clearance.

Three minutes later, David Abagna scored a third for the home team before adding another in the 88th minute to complete the victory for the Miners.

The result leaves AshantiGold in 6th place with 21 points while Aduana Stars drop to 7th place.

AshantiGold travel to Dawu to take on in-form Dreams next Thursday while Aduana host Inter Allies at Dormaa Ahenkro next Sunday on match day 16.

Now is the 'right time' for Everton to beat Liverpool - Ancelotti