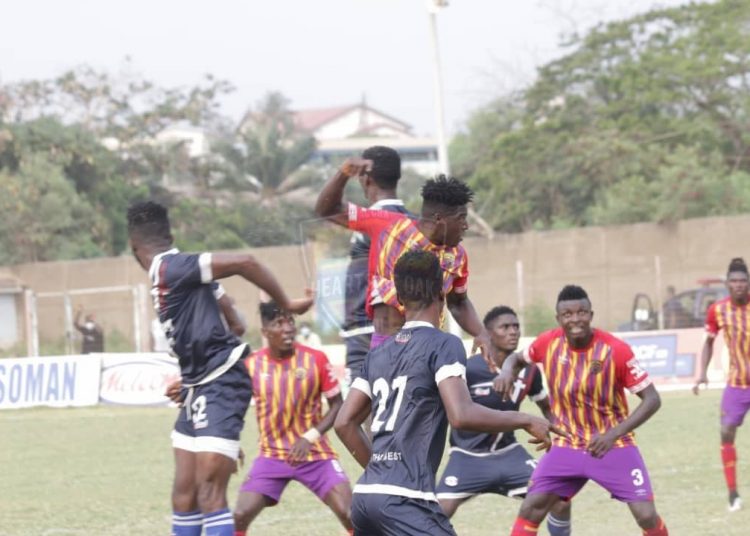 Hearts of Oak recorded consecutive Ghana Premier League wins after they beat Liberty Professionals 1-0 at the Karl Reindorf Park in Dansoman on Wednesday in Week 16.

Substitute Isaac Mensah found the winning moment for Hearts in the 74th minute after he tapped home from close range. The result marked the second win for the Phobians after they went past Dwarfs 3-2 in Week 15 in Accra.

WAFA responded to their Week 15 loss to Inter Allies with a 3-1 comeback victory over Karela United at the Red Bull Arena in Sogakope.

Kwame Boateng opened the scoring in the 14th minute for Karela but Augustine Boakye (20th minute) and Andrews Ntim (30th minute) put WAFA into the lead before half time and the result was put beyond the visitors through Lawrence Agyekum’s late strike.

Aduana Stars beat Inter Allies 2-1 in Dormaa with goals from Yahaya Mohammed and an Emmanuel Adjetey own goal. Samuel Armah pulled one back for Inter Allies in the 84th minute but that was as far as the visitors could go.

In Cape Coast, King Faisal‘s Fuseini  Mutawakilu’s own goal was enough for Ebusua Dwarfs to grab a 1-0 home victory over the Kumasi-based team while Medeama‘s Prince Opoku Agyemang and Joseph Tetteh Zuta found the net in a 2-0 home victory over Techiman Eleven Wonders.