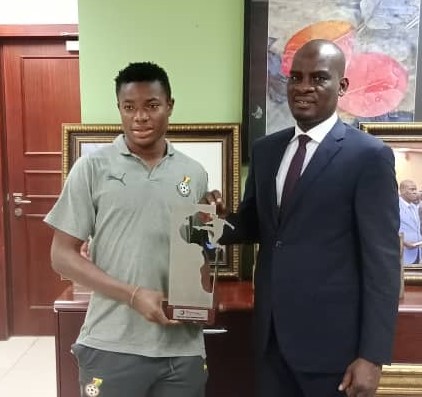 Ghana U-20 star, Abdul Fatawu Issahaku, has presented the “Best Player of Tournament” award he won at the just ended U-20 Africa Cup of Nations to Minority Leader of Ghana’s Parliament, Haruna Iddrisu.

The MP for Tamale South is the legal guardian of the 17 year old, who also plays for Tamale-based Ghana Division One side, Steadfast FC, a team owned by Haruna Iddrisu.

Issahaku was a standout performer in the Black Satellite’s road to lifting a 4th Africa U-20 title in Mauritania last week.

He scored two spectacular goals and was eventually named the best player of the competition at the end of the tournament.

He is expected to rejoin his club teammates for the ongoing Division League campaign as Steadfast chase promotion to Ghana’s elite division.