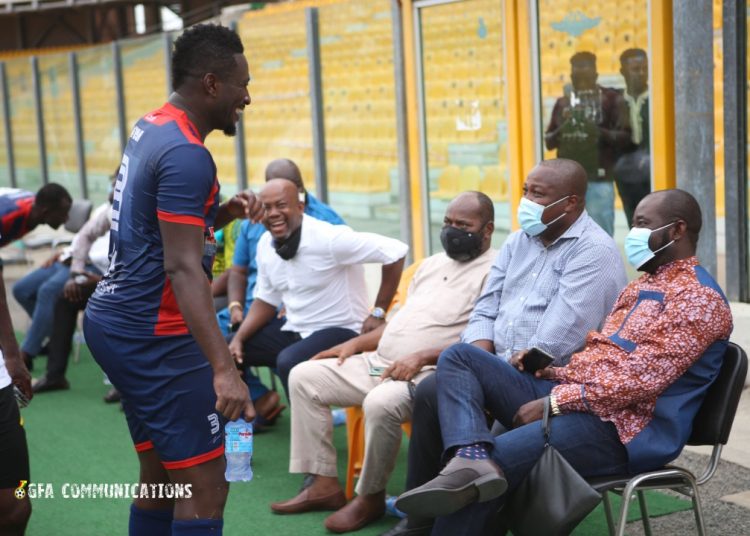 The Black Stars stepped up preparations for the final laps of the 2021 Africa Cup of Nations qualifiers with a friendly win against Ghana Premier League side Legon Cities Wednesday afternoon.

The Ghana senior national team defeated the Royals 3-1 at the Accra Sports Stadium.

Newly-signed USM Alger striker scored from an assist by winger Yaw Annor in the 26th minute to give CK Akonnor’s side a 1-0 lead at halftime.

Three more goals came through with the second half with the Black Stars scoring twice more than Cities.

On 51 minutes, Kwame Opoku turned the provider for midfielder Mubarak Wakaso to make it 2-0.

Wakaso then returned the favour this time for Bechem United midfielder Salifu Moro to score the third for the Black Stars right on the hour mark.

Ghana’s all-time top scorer Asamoah Gyan, who was featuring for his club, got the consolation goal via a spot-kick 10 minutes from time. 3-1 the game ended.

The Black Stars may play one more warm-up game to wrap up their preparations before emplaning to Johannesburg to face South Africa in their penultimate match in Group C of the qualifiers.

The Bafana Bafana host their Ghanaian counterparts on Thursday, March 25 who will return home to complete the qualifiers to Cameroon 2021 at home against Sao Tome and Principe three days later.

His involvement was Massive 👏🏾

Gilberto Silva: Arsenal have lacked a ‘Partey kind of midfielder’ for too long