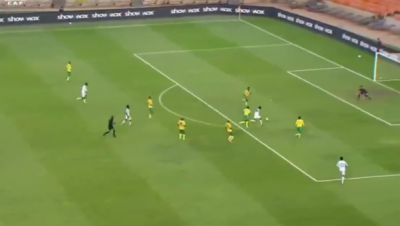 Kudus Mohammed scored a wonderful goal for the Black Stars in their AFCON qualifier against South Africa on Thursday.

The Ajax star ran onto a pass from the right at the start of the second half and beat the South African defence with a delightful touch which took him into the box.

His second touch was even better as his shot beat the keeper and went in off the post.

Up until then, Ghana had been pretty poor, with South Africa failing to take advantage of their better chances.

Ghana’s joy was short-lived, however, as the South Africans equalised minutes later through Percy Tau.

The goal was Kudus’ second for the Black Stars, with both of them coming against South Africa.

The Black Stars are level on points with South Africa and will qualify to next year’s AFCON with a win over their hosts today.