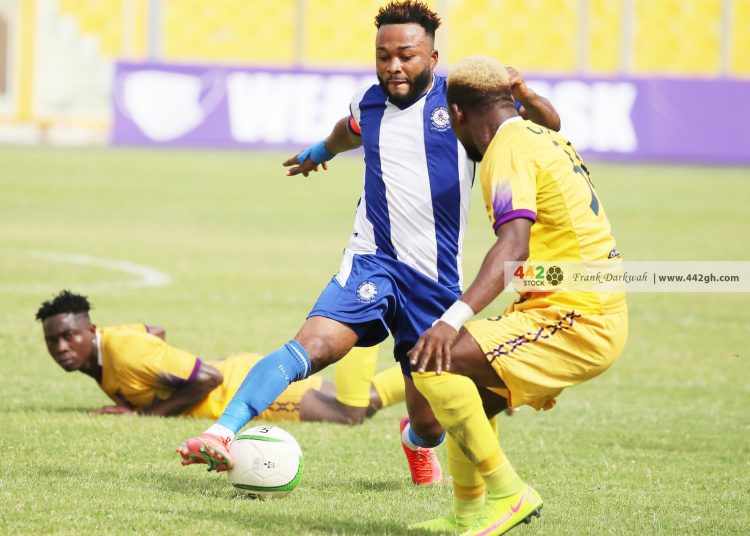 Great Olympics opened the second round of the 2020/21 Ghana Premier League (GPL) with a narrow win over Medeama SC at the Accra Sports Stadium on Good Friday.

The Dade Boys beat the Yellow and Mauves 1-0 and climbed top of the standings with 33 points, displacing Karela United who host AshantiGold on Sunday.

Olympics dominated proceedings from start but could not find an opening until the 36th minute of the match-day 18 encounter.

Burly striker Abdul Mudasiru brilliantly set Samuel Nii Ashie Quaye free with a dummy off a pass from the Olympics half and the youngster applied pace and composure to outrun Daniel Egyin before slotting the ball through the legs of goalkeeper Frank Boateng who had replaced injured first-choice and captain Eric Ofori Antwi.

Quality chances were few and far between during the opening half for Medeama and one fell to striker Prince Opoku Agyemang very late but he opted to go for glory and hit the ball into the Olympics goalkeeper instead of setting up new teammate Zakaria Mumuni to finish off with a pass.

Medeama hoped for a second-half turnaround but the hosts returned more dominant with more chances but neither side was able to produce another goal in the game.

Awako came close twice within a minute – after a beautiful movement off the ball, he first squeezed a left-footer to the far post but missed the target in the 73rd minute. Moments later, Akaminko spotted Awako with a well-executed training ground routine but the skipper blasted the ball over the bar.

With a minute from time, right-back Phillip Nii Sackey delivered a teasing cross across the face of goal but Ivorian Zaha Coulibaly dangerously put the ball away from danger with a low header.

Medeama had a late opportunity to salvage a point deep into additional time but they fluffed their free-kick chance.