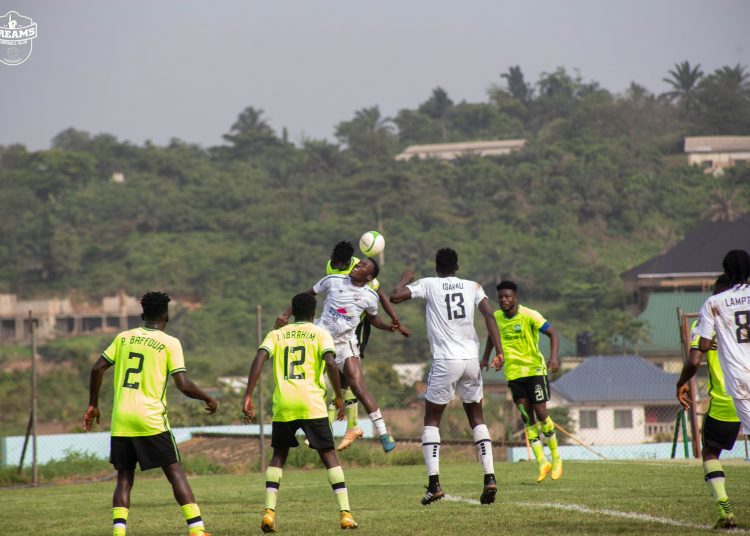 The Ghana Premier League returned after a four week break with exciting games across the country.

Bright Amponsah had shot the home team ahead on the stroke of half time before Hans Kwofie pulled the visitors level in the 76th minute with his 4th goal for Legon Cities in 4 games.

But Amankona popped up with the winner 10 minutes from time, his 5th goal of the season, having also scored when the two sides met earlier in the season in Accra.

Liberty Professionals made quite a few additions to their team in the last transfer window but that did little to prevent them from losing 2-0 away to Bechem United.

Two late goals from Emmanuel Annor and Emmanuel Owusu were enough to hand Liberty a 5th successive defeat in the league.

Benjamin Bernard Boateng scored the only goal of the game in the Central Region Derby to give Elmina Sharks all three points over local rivals Ebusua Dwarfs.

It’s a second consecutive victory for Sharks’ new coach, who took charge of the team at the end of February 2021.

In Dawu, departing Joseph Esso scored his 11th goal of the season for Dreams FC in a 1-1 draw at home to Inter Allies.

Last week, Dreams announced they had agreed a deal for Esso to join Algerian giants USM Algers and his new employers would have loved to see him bury a penalty in the 6th minute to hand Dreams the lead. But that only lasted 12 minutes before Inter Allies, who announced they would be using the Dawu Theater of Dreams during the second round, levelled through Richard Arthur.

Elsewhere, league leaders Karela United were held to a 1-1 draw at home to Ashantigold. It is only the second time Karela have dropped points at home this season.

Seth Osei Kwadwo shot the visitors in front in the 38th minute and they looked like they had done enough to secure all three points before Umar Bashiru popped up with the equalizer in the 94th minute.

The two dropped points mean Great Olympics remain top of the league, after they climbed to the summit with a 1-0 win over Medeama on Friday night.

On Saturday, Eleven Wonders held Asante Kotoko to a 1-1 draw. Fabio Gama scored his first goal for the Porcupine Warriors but Samuel Boakye’s equalizer ensured the spoils were shared in Techiman.