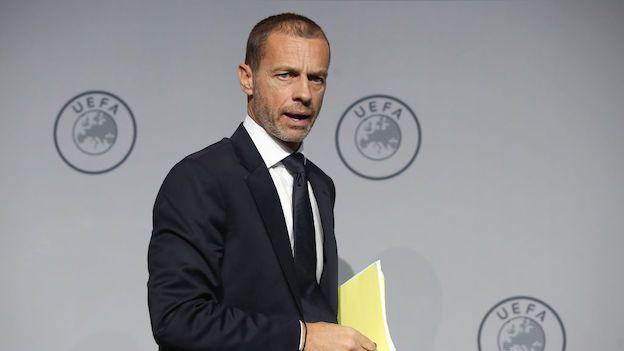 UEFA president Aleksander Ceferin has strongly condemned “disgraceful” proposals for a new European Super League as a “spit in the face of all football lovers”.

The head of the European governing body also confirmed any players featuring in the European Super League will be banned from the World Cup and European Championships, with bans for the latter competition being sought “as soon as possible”.

When asked if the proposals, which were announced on Sunday night by 12 of Europe’s top clubs, would stop any players from competing in Euro 2020, Ceferin said: “We’re still assessing the situation with our legal team. It’s a bit too early.

“We will take all the sanctions that we can and we will inform you as soon as we have a clear answer. My opinion is that, as soon as possible, the players have to be banned from all our competitions.

He added: “I cannot stress more strongly UEFA and the footballing world are united against the disgraceful, self-serving proposals we have seen, fuelled purely by greed.

“It’s a nonsense of a project. This idea is a spit in the face for all footballer lovers and our society. We will not allow them to take this away from us.”

Ceferin said he was “naive, there are snakes close to us” over the Super League proposals.

He strongly criticised Manchester United executive vice-chair Ed Woodward, who has stepped down from his roles with UEFA alongside his club’s withdrawal from the European Club Association.

Ceferin said: “I was a criminal lawyer for 24 years but I’ve never, ever, seen people like that. If I start with Ed Woodward but he called me last Thursday, saying that he’s very satisfied with reforms and he fully supports them. Obviously he already signed something else.”

He revealed Monday morning’s meeting decided on a new Champions League format to run from 2024, with no more groups and all teams in one ranking, playing 10 different opponents home and away.

When asked if the Champions League could proceed without the 12 clubs signed up to the European Super League plans, Ceferin said: “Yes, of course. In Europe there are many good clubs. We will do it with or without them.”