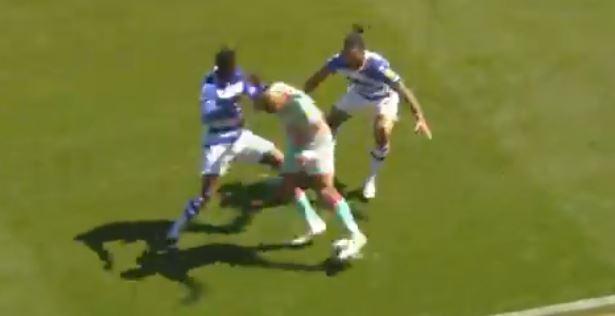 Swansea forward, Andre Dede Ayew, produced a moment of class, nutmegging a Reading player to set the tone for the first equalizer in Swansea’s draw.

Swansea City secured a ticket to play in the Championship playoffs with a 2-2 draw with Reading FC at the Madejski Stadium over the weekend.

Andre Ayew, surrounded by three Reading players, produced an improbable pass, channeling the ball in between the legs of Liam Moore for Swansea’s equalizer as a counter-attack ended up in a goal for the Welsh side.

Andre Ayew. That is all. pic.twitter.com/OrO1h992lU

The Ghana international continued his impressive run with Swansea, scoring in the 83rd-minute as the Swans drew the match to join the likes of Barnsley, Bournemouth, and Brentford in the playoffs.

Swansea and Dede Ayew will hope to avoid the disappointment of last season when they lost out on promotion to the Premier League.

Last season, Ayew was instrumental in getting Swansea to the playoffs with his 15 goals. He scored the winner in the first leg of their play-off semi-final against Brentford, but they lost the return leg 3-1, ending their hopes of promotion.

The first legs of the Championship play-offs are slated for May 29, 2021.