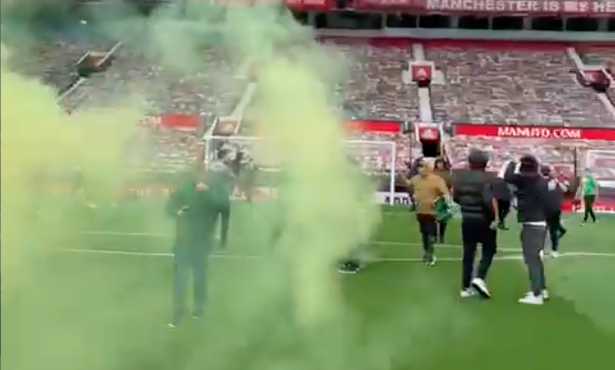 United fans arrived in their thousands at Old Trafford to protest the Glazers’ ownership following the European Super League fallout and ahead of the Premier League fixture against Liverpool.

With green and yellow smoke filling the air around the 76,000-seater stadium, a large number of the Reds fanbase chanted and held banners reading ‘Apology not accepted. 50+1’,

But, despite a large police presence, some fans broke through the barriers and onto the Old Trafford turf. Flares were set off as a number of fans were seen running across the pitch and around the goalmouth area.

Supporters on the pitch could be seen posing for pictures, holding match balls and walking with corner flags.

Objects were also thrown towards the area where Sky Sports do their presenting, with various chants directed at certain members of the punditry team.

In one video, a flare is launched up and at the broadcasting team.

Fans also gathered at the team’s Lowry Hotel. With hundreds by the entrance, seemingly in a bid to block the team from leaving the five-star premise.

At time of writing the Premier League stated that the game will still go ahead.

The protests follow the club’s decision to co-found the European Super League, before United chiefs made a swift withdrawal and apology.