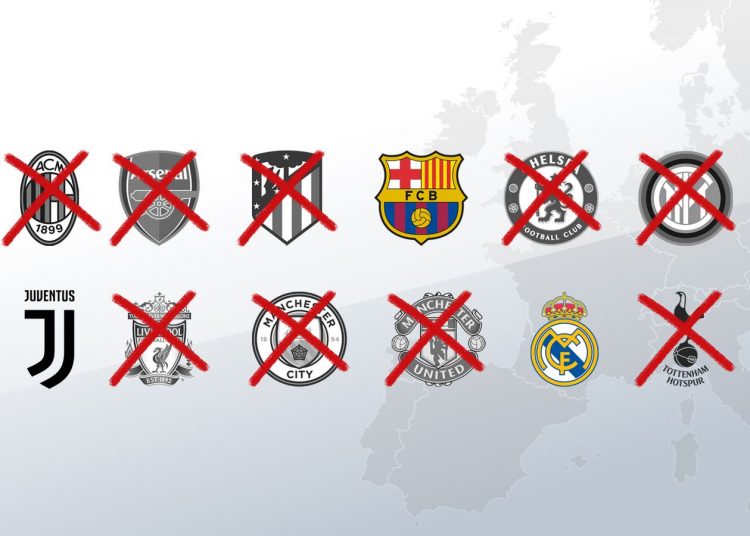 A disciplinary investigation has been opened against Real Madrid, Barcelona and Juventus in connection to their involvement with the European Super League project, UEFA has announced.

The trio are the only clubs from the original 12 involved in the breakaway plans yet to formally withdraw.

The nine clubs who pulled out of the European Super League – including Manchester United, Manchester City, Liverpool, Chelsea, Arsenal and Tottenham – are back in the UEFA fold and have agreed to “take all steps within their power” to end their involvement in the breakaway league, which was abandoned within 72 hours of its announcement amid considerable fan protests, Government pressure, and player and manager rejection.

The prospect of disciplinary action appeared inevitable last Friday when a statement confirming the peace accord with nine of the clubs ended:

“UEFA has reserved all rights to take whatever action it deems appropriate against those clubs that have so far refused to renounce the so-called ‘Super League’.

“The matter will promptly be referred to the competent UEFA disciplinary bodies.”

On Saturday, Real Madrid, Barcelona and Juventus hit out at “intolerable” pressure and threats to abandon the European Super League project, and vowed to “persevere” with the idea despite its considerable rejection.

Their statement read: “The founding clubs have suffered, and continue to suffer, unacceptable third-party pressures, threats, and offenses to abandon the project and therefore desist from their right and duty to provide solutions to the football ecosystem via concrete proposals and constructive dialogue.

“This is intolerable under the rule of law and tribunals have already ruled in favour of the Super League proposal, ordering FIFA and UEFA to, either directly or through their affiliated bodies, refrain from taking any action which may hinder this initiative in any way while court proceedings are pending.”

What punishment do the nine Super League rebels face?

In announcing their recommitment to UEFA on Friday, the nine clubs will make a combined goodwill contribution of just over £13m to benefit children’s and grassroots football across Europe. They will also have five per cent of UEFA competition revenues withheld for one season and this money will be redistributed.

They also face fines of almost £87m each if they seek to join an unauthorised competition in the future, and a fine of half that amount if they breach any other terms of the declaration. They will also rejoin the influential lobbying group the European Club Association.

A spokesperson for Manchester United confirmed the Glazer family would personally cover their club’s share of the goodwill money requested and the withheld funds. It is expected that the amount the Glazers would be liable for is between five and 10 million euros.

“I said at the UEFA Congress two weeks ago that it takes a strong organisation to admit making a mistake especially in these days of trial by social media. These clubs have done just that.

“In accepting their commitments and willingness to repair the disruption they caused, UEFA wants to put this chapter behind it and move forward in a positive spirit. The measures announced are significant, but none of the financial penalties will be retained by UEFA. They will all be reinvested into youth and grassroots football in local communities across Europe, including the UK.

“These clubs recognised their mistakes quickly and have taken action to demonstrate their contrition and future commitment to European football. The same cannot be said for the clubs that remain involved in the so-called ‘Super League’ and UEFA will deal with those clubs subsequently.”