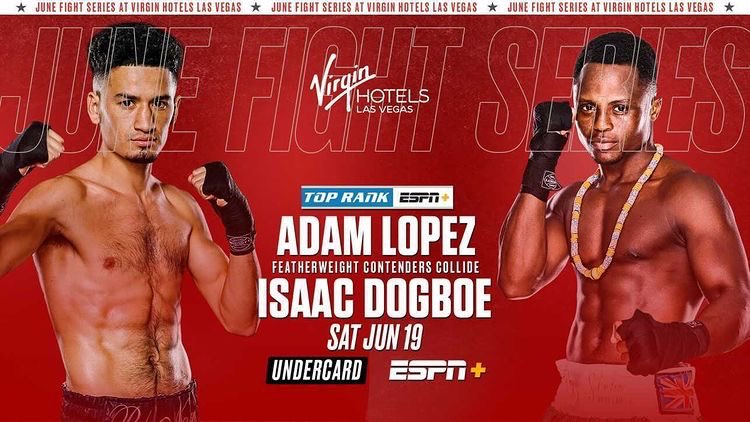 The former WBO Super Bantamweight champion has been working around the clock as quickly as possible to get back to his feet after losing back to back to Emanuel Navarrete back in 2018 and 2019 losing his title in the process. He a year later moved in weight to fight Chris Avalos at the feather weight division to make an announcement of his come back to all his fans and the title holders in the feather division.

Haven knocked out Avalos in the 8th round on July 21 last year, all have been hoping to see him fight again to better his chances of getting a title shot but the Anyako Royal had a few issues to settle. After 10 months of inactivity, the Royal Storm Dogboe is now back to business to do what he doest best in the square ring.

WHO IS ADAM LOPEZ?

It was officially announced and confirmed by Isaac Dogboe via his twitter handle that he’ll be facing American Adam Lopez (15-2, 6KOs) slated under Inoue vs Dasmarinas bout on a Top Rank- ESPN show.

Adam ‘Blunose’ Lopez 25, was born in Glendale, California, USA with 17 professional fights to his credit winning 15 and losing 2 in the process. He had his professional debut on 13th May, 2016 where he fought Hector Garcia and won via a round 1 TKO. His first lost came in his 9th fight against Stephen Fulton in 2017, the other lost was his 15th pro fight where he lost to Oscar Valdez who’s currently the WBC World Super feather titlist via a round 7 TKO.

Adam Lopez currently holds the NABF Featherweight title where he won it against Luis Coria in June 2020 and defended it against against Jason Sanchez in February this year.

Lopez isn’t having a bad CV at all and go all out against the man on a mission to become a 2 time world champion come fight night next month in the States.

Isaac is ready to come back in a grand style to put the title holders on the alert come fight night night on 19th June.

These are the current champions in the featherweight division

We wish Isaac Zion ‘Royal Storm’ Dogboe all the best in this important fight come June 19.