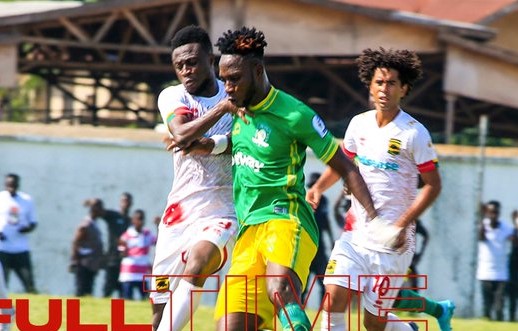 Goalkeeper Razak Abalora put up a man of the match performance but it was not enough as Kumasi Asante Kotoko dropped another two points in the title race with a hard-fought 0-0 draw against Aduana Stars at the Nana Agyemang Badu Park on Saturday.

Aduana Stars started the match in a spirited mood, controlling much of possession but were unable to make it count on the scoresheet.

Asante Kotoko quickly found their rhythm and began forcing the hosts to coil into their shell.

Samuel Bio, who struck the dagger in the hearts of the Porcupine faithful, nearly fetched the opener for Aduana Stars but his long drive was equally dealt with by goalkeeper Razak Abalora.

In the 7th minute, Bio again went close to breaking the deadlock but could not direct his header after being fed by a sweet cross from Sam Adams.

Fans of Asante Kotoko at the Nana Agyemang Badu Park thought they had the opener after Mudasiru Salifu struck the ball beautifully from the edge of the area, but the ball went just wide.

Aduana Stars were left off the hook after goalkeeper Joseph Addo’s clearance went straight to Kotoko defender Christopher Nettey who went for goal from the half way line but Farouk Adams cleared the ball off the line.

It was not long as the Fire Boys had a penalty shout waved off by referee Julian Nunoo. Aduana Stars forward Bright Adjei was bundled off the ball by Mudasiru. The Asante Kotoko midfielder was just lucky as the incident could resulted in a spot kick.

Aduana Stars had a perfect chance to go ahead but Sam Adams did not keep his composure as he effort was parried off the bar by goalkeeper Abalora.

The hosts went close again just a minute after the miss by Adams. Nurudeen Abdulai headed his ball against the upright with Abalora rooted to the ground.

In the 42nd minute, Sam Adams was presented with another clear opportunity to put his side ahead but he again fluffed his line as Abalora made a big save to deny him.

Asante Kotoko defender Ismael Ganiu put in a last-ditch tackle to deny Bio from firing Aduana in front from close range just before referee Nunoo brought an eventful first half proceedings to an end.

The visitors returned from recess with lots of zeal in their bid to open the scoring. The Kumasi-based lads nearly got the first goal after breaking free in Aduana’s half but Fabio Gama failed to glide the final pass to Nettey who was unmarked.

Habib Mohammed nearly gifted Aduana a chance in the 65th minute after failing to control the ball in the box but the defender was lucky to have the second bite of the cherry after the ball hit the shin of Bright Adjei and bounced back to him.

After the 75th minute, Kotoko finally created a decent chance with a fine pass by Anabila to open the defense of Aduana, but striker Andy Kumi reacted slowly as goalkeeper Joseph Addo superbly timed his run to tip the ball to corner.

Adomako tested Addo with a fine drive on the edge of the box but the goalkeeper calmly dealt with it.

Kotoko appeared much more organized in the final embers of the game but failed to bury the half chances to go ahead.

The result saw Aduana Stars move to 7th with 40 points while Asante Kotoko leapfrogged rivals Hearts of Oak on the table with 47 points.

Hearts of Oak meanwhile have a date with Berekum Chelsea at the Accra Sports Stadium on Sunday.

Champions League Final: All you need to know ahead of Man City v Chelsea