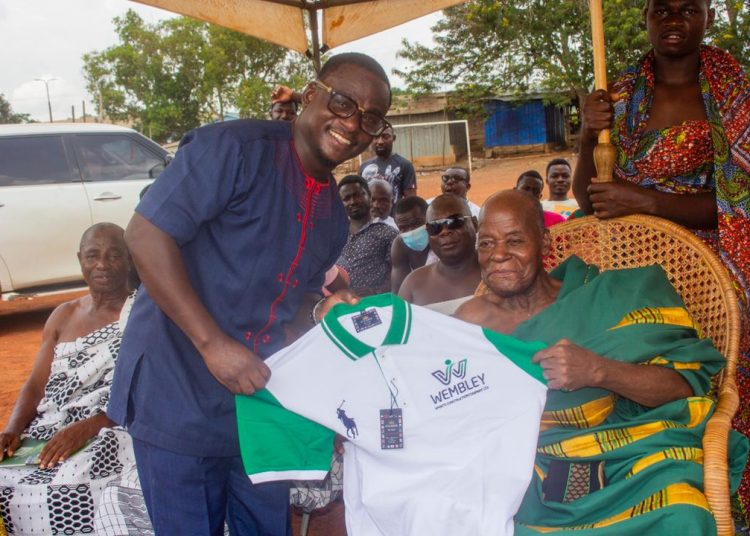 The Paramount Chief of Agogo(Agogomanhene) in the Ashanti Region, Nana Akuoko Sarpong has endorsed the One Constituency, One Astroturf initiative by Wembley Constructions as it will unearth talents for the national teams.

Speaking at the sod-cutting ceremony for the construction of a state-of-the-art astroturf at Agogo on Sunday, the Chief said, the country had great talents and would require the best stadia to develop them into global sporting icons.

“We are excited about the One Constituency One AstroTurf project knowing that the old Agogo Park would also be transformed into a sports complex that would help unearth talents in the area and the country at large,” he stated.

“Just like Jamaica did with Usain Bolt, I am certain Ghana would have one of the greatest athletes to grace the global stage from Agogo when the complex is completed,” he added.

“The Park has existed for over four decades and despite its unattractive nature, had produced great footballers for the country and would do more when the stadium is completed,” he added.

He also urged contractors to complete the facility within the scheduled time so it would be available for the youth in the area and beyond.

The Ghana Gas funded complex would have a FIFA standard football pitch, floodlights, spectator stand, fencing and other facilities.

On her part, Queen Mother of the area, Naana Afrakoma Serwaa Kusi Obuadum also urged the youth to maintain the facility when completed to benefit future generations.

“We must all get involved and after the contractor is done, the youth must ensure that they keep the stadium in good shape for the benefit of everyone,” she stated.

The maintenance of the stadium, she said would attract other essential amenities to the town from corporate bodies like Ghana Gas.

Director of Communications at Ghana Gas, Mr Ernest Kofi Owusu Bempah said the old sandy pitch was not befitting to the people of Agogo, hence the need to come on board to support build a proper stadium.

“I have had the chance to play on the park and witnessed great talents displayed despite the nature of the park and thought it was essential to construct an astroturf here,” he stated.

Aside from developing talents, he said, the construction would create over 25 jobs for the youth of the area.

He expressed appreciation to the management of Ghana Gas for making funds available for the project and urged contractors to immediately start work and complete it within the scheduled time.

In view of that, Chief Executive Officer(CEO) of Wembley Constructions, Mr Robert Coleman, said the complex would be ready for commissioning in six months.

“We would begin work immediately and certain the complex would be completed by December, ” he assured.

He said they would also train 10 people from the community to maintain the astroturf and ensure it always stayed in good shape.

Wembley, he said, had so far constructed 36 stadia across the country and would do more under their One Constituency, One Astroturf initiative.