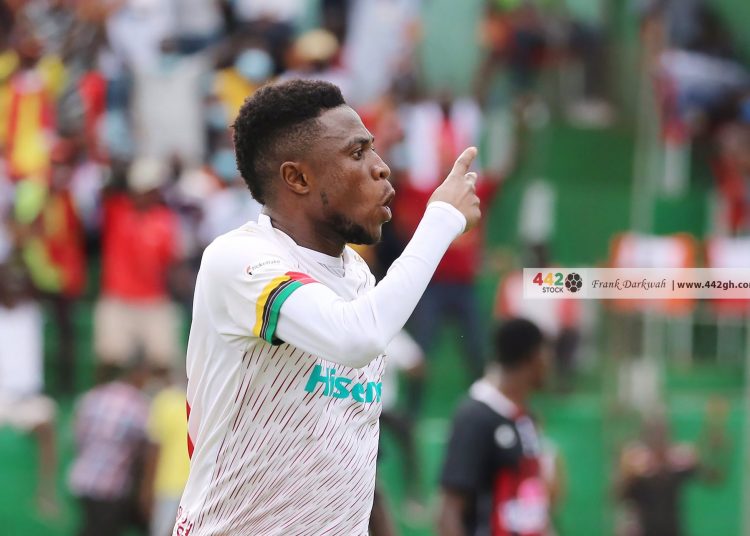 Asante Kotoko starman Emmanuel Gyamfi has been charged on a count of misconduct for deliberately stamping on an opponent in their Ghana Premier League match-day 29 triumph over Inter Allies on Monday.

The Porcupine Warriors edged their hosts 3-2 in a cagey thriller at Dawu Park.

But the match did not go without a controversial incident as Gyamfi – who captained Kotoko – engaged in an act of misconduct around the 65th minute that escaped the centre referee.

“Emmanuel Gyamfi is hereby charged for a breach of Article 34 (6)(d) of the GFA Premier League Regulations, 2019,” reads the statement of offence in the misconduct charge signed by GFA Prosecutor Supt. Solomon Korli and dated June 15, 2021.

The Prosecution’s particulars of offence against the winger also read:

“Emmanuel Gyamfi: You: on 14th of June 2021, during the match between Inter Allies FC and your team at the Theatre of Dreams, did stamp player number 45m of Inter Allies (Andy Okpe) in an off-ball situation around the 65th minute of the game, an action which in the opinion on the association is an improper and likely to bring the game into disrepute.”

Any punishment for Gyamfi is subject to a decision by the Disciplinary Committee of the GFA with the player entitled to submit a statement of defence to the charge by 5 pm on Friday, June 18.

In addition to matters referred to in any other regulation, it shall be misconduct if a club, director, official, referee, Assistant Referee, or Player or member is proved to have done or permitted or assisted any of the following to be done:

[6][d] Commit any offensive act not provided for above or make any offensive statement either verbally or in writing or is responsible for any conduct or any matter which is in the opinion of the Association, ungentlemanly, insulting or improper behaviour or likely to bring the game into disrepute.