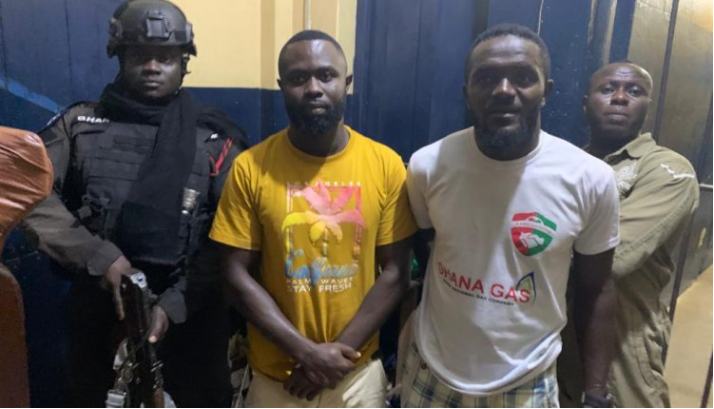 0
SHARES
17
VIEWS
Share on FacebookShare on TwitterShare via Whatsapp

Two Karela United fans have been grabbed by the Ghana Police Service for attacking Medeama SC players during the FA Cup game at the Crossby Awuah Memorial (CAM) Park on Sunday.

The two men – David Yankey nicknamed Akpale, 32, and Jonathan Essien, 33, have been arrested by the Tarkwa Police following a swoop on Sunday night.

The hooligans will be sent to the Sekondi Regional Police Headquarters for further action Monday afternoon.

In all, seven suspects are believed to have instigated and attacked players of the visiting team and damaged the team’s bus following Karela United’s 2-1 defeat to Medeama in the FA Cup Round of 32.

The remaining seven suspects – who are based in Tarkwa’s Akoon are on the run for engaging in the dastardly act at the Crossby Awuah Park.

The Police are hot on the heels of five other suspects whose names are given as Isaac Arthur, Otwu, Palamo, Sunset and Kofi.

On their part, Karela United has started an investigation into the unfortunate incident which has overshadowed the side’s FA Cup match at Aiyinase.

Earlier, the Yellow and Mauves wrote to the Ghana Football Association to caution on the happenings at the Crosby Awuah Memorial Park.

In the game, Prince Opoku Agyemang opened the scoring in the first half, capitalizing on a defensive howler to give the visitors the lead.

Ebenezer Ackahbi increased the tally with a superb finish before Diawisie Taylor pulled one back for Karela.

Referee Philip Arthur-Forson  was forced to delay the match on two occasions following  the marauding attacks from the home fans.

Medeama midfielder Eric Kwakwa was hit with a stone as he made his way to the tunnel after the first half.

More military men were forced onto the pitch to protect life as the attacks continued at the venue.

Journalists had their share of the happenings as they were  denied entry into the stadium with the game delayed close to 30 minutes into the second half.

Karela United, in an official statement, say they will cooperate with authorities in finding all responsible for the actions.

The statement signed by Club CEO Elloeny Amande affirms the club’s interest in offering support to the GFA and Medeama players and staff.