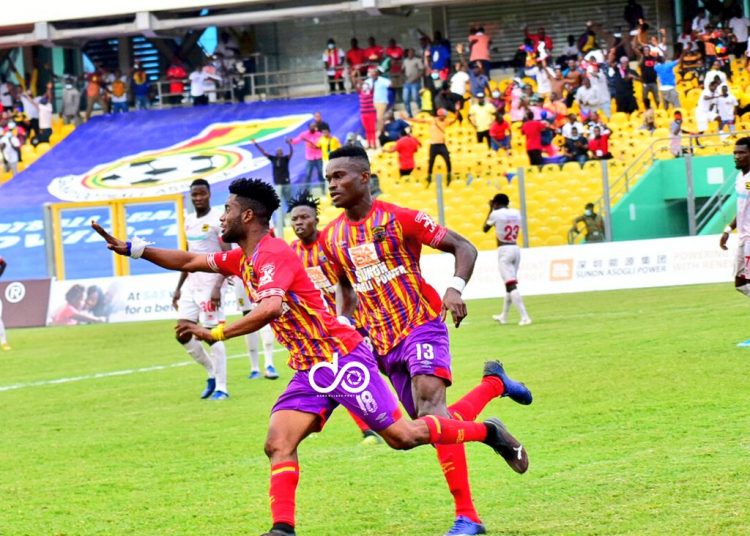 Accra Hearts of Oak pulled off a clutch performance to secure victory against rivals Asante Kotoko and took a giant step closer to a first Ghana Premier League title in eleven years.

In a game where both teams had everything riding on it – pride, three points, a league title even, big characters needed to step up. It was the sort of game that has made heroes and villains alike.

Kotoko fans still speak of Michael Akuffu for that glorious long-range strike in 2012; the same way Hearts of Oak fans speak of that Don Bortey free-kick that won their 18th league title in 2005.

On Sunday afternoon, Daniel Afriyie Barnieh wrote his name in Hearts of Oak folklore. If the Phobians go on to win the league title, as many expect them to do, Sunday’s game would always be the reference game. And it was Barnieh who put the final strokes on a beautifully executed piece of art.

The Ghana U-20 captain delivered the win when it appeared the Phobians were on the road to a scrappy draw. They had been the better side, but a combination of poor finishing and great goalkeeping had kept Kotoko in the game for well over an hour.

The rhetoric before the game mostly centred around the impact of Salifu Ibrahim of Hearts of Oak and Fabio Gama of Kotoko. They were deemed the ‘star players to watch.

But for many who had watched the Phobians in recent months, they were banking their hopes on Barnieh.

It’s been a whirlwind journey for the 20-year-old to finally get to the point where he has become the reference point for leadership and triumph.

In December 2019, seventeen-year-old Daniel Afriyie was at the end of a four-week trial at Kumasi Asante Kotoko. Those four weeks were some of the hardest for the youngster. Playing as a striker the whole time, he struggled to impress.

“I’ve never really seen myself as an out-and-out striker, but I did not have the choice to tell the coach my favourite position. They might have dropped me,” he said of his time at Kotoko.

Maxwell Konadu had just made a return to the club as head coach and looking to strengthen his squad.

Barnieh was told he did not make the cut.

“I was disappointed, but I just told myself I was young, and I would continue to work hard.”

Barnieh returned to second division side Madina Republicans and one year later, he signed for Hearts of Oak, in January 2020.

See it as a master-stroke by his agent or sheer luck, how Barnieh ended up at the Phobians is a curious case.

“I came to Accra Hearts of Oak through my fellow player Abdul Aziz Nurudeen. We shared the same agent, so I was added to his negotiations, but I was to only come and play and be observed by the coach.”

In January 2020, Hearts of Oak were convinced they had seen enough of the nimble-footed attacker and offered him a three-year contract.

He had mostly wallowed in lower leagues in the country where the pressure to perform ranged from minimal to non-existent. At Hearts of Oak however, the pressure is monumental and from all spheres.

Barnieh had a slow start to life at Hearts of Oak, struggling to create or score, and was often accused of being unintelligent. “He’s too wasteful” they said.

In February 2020, a month after he signed for Hearts of Oak, the club faced Ashantigold in the truncated 2019/2020 Ghana Premier League season. Barnieh was guilty of missing clear-cut opportunities.

His attempts to explain his profligacy in the post-game soon became internet meme royalty in what has now become known as the “Daniel Afriyie Decisions Theory”.

See eh, I’ve watched this video like a 100 times. Daniel Afriyie’s explanation on how he missed a 1v1 opportunity against Ashantigold is legendary.

Certainly, though, that looks like a century ago now.

Since his return from Mauritania where he captained the national U-20 to AFCON victory, Barnieh has transformed into a fearless footballer; confidence high and with the attitude of a winner.

His skill level has improved and his end product even better.

The end of that famous Barnieh interview had him saying; “next time, I will raise my head, watch the goalposts, and put the ball at the back of the net.”

Fair to say, he meant what he said, and Hearts of Oak are getting rewarded for sticking with him through his tough times and trusting in his abilities.

At the moment, Barnieh is on a roll and there’s no stopping him until his bones are rotten.