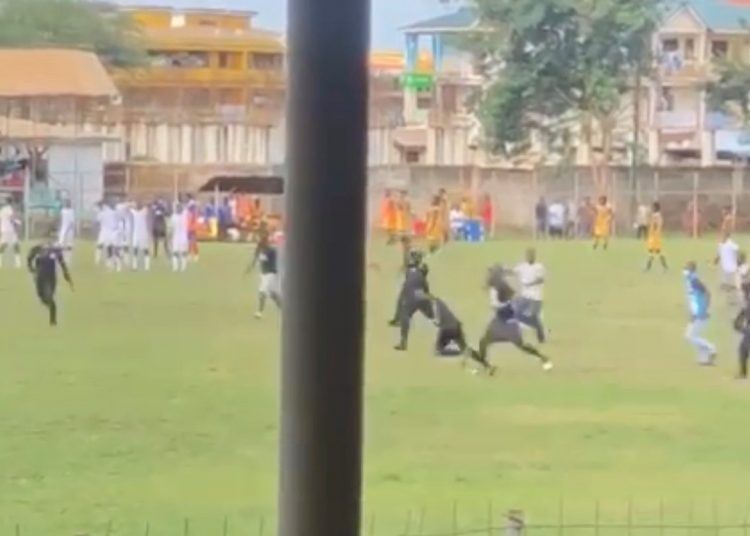 Fans of Divison One League side, BA United, mercilessly beat up referee Maxwell Hanson after he awarded a first half penalty for Real Tamale United in their National Division One League game in Sunyani on Sunday.

RTU went into the game just one point above Berekum Arsenal and Tano Bofoakwa in Zone II of the Division One League and a win would have guaranteed their return to the top flight for the first time since 2013.

With BA United not in the fight for promotion, Brong Ahafo-based Bofoakwa and Arsenal fans reportedly stormed the Sunyani Coronation Park to throw their support behind BA United knowing victory for BA United would keep their promotional hopes alive.

And after referee Hanson awarded a penalty to RTU, fans breached the inner perimeter fence of the park and chased the referee around the pitch until he was eventually overcome and handed heavy slaps before security came to his rescue.

Penalty for RTU at Coronation Park and there is mayhem. Before you talk about security, let me add there are many military and police officers here. They're beating the hell out the referee. Zone 1. Welcome to Hell. pic.twitter.com/KNAK1lA8zs

Sports Journalist, Collins Atta Poku, who was at the game, narrated to Citi Sports that the referee was forced to rescind the penalty decision in an attempt to please the home fans and continue the game but agitated RTU fans started to throw projectiles and missiles onto the pitch which forced the game to be called off.

“The referee then decided to continue the game but first, he overturned the penalty decision and that did not please RTU fans either because there was no VAR or any basis for his decision and they also started to throw projectiles onto the pitch so he had no choice than to call off the game,” he said.