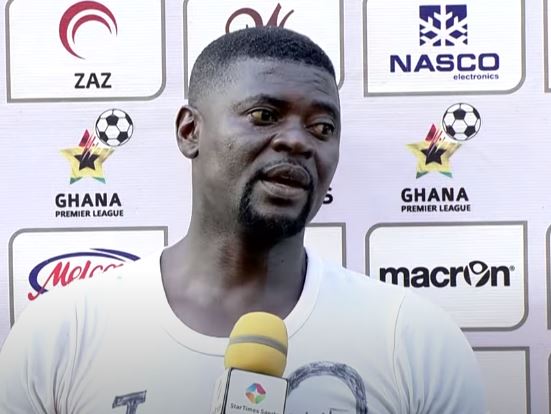 Newly-crowned Ghana Premier League winner, Samuel Boadu, has expressed his appreciation to the entire Hearts of Oak team and has spoken highly of the club’s ‘unique’ nature that helped him to excel in his first season with the Phobians.

Boadu was appointed by Hearts on March 1 after he left Medeama Sporting Club and he has managed to guide Hearts to their first Ghana Premier League title since 2009.

The league capture was confirmed after Hearts drew 1-1 with Liberty Professionals at the Accra Sports Stadium and Kotoko lost 2-1 at Bechem United in Week 33.

Speaking after the match StarTimes, Boadu shared his thoughts on his time at Hearts so far and was very grateful for how the team given him the right atmosphere to work and attain success.

“There is something unique about Hearts of Oak. When I came in, the management welcomed me and the fans kept encouraging me.

They believed that I could succeed and they asked me to push on. The team’s success is down to them.”

Hearts’s newest league title was celebrated by the club and fans alike on social media with personalities such as the Vice-President of Ghana, Dr. Mahamudu Bawumia congratulating the team via a Twitter post that also mentioned the Euro 2020 finals and the promotion of Bibiani Gold Stars to the Ghana Premier League ahead of next season.

Congratulations to Accra Hearts of Oak for winning the 2020/2021 @GhanaLeague.

I also congratulate Bibiani Goldstars FC on their historic qualification from Zone Two of the Division One League to the Premiership. pic.twitter.com/fZmUFvcmYo

One gone, one remaining.
We have won but we remain focused on the next CUP.#AHOSC#PositiveEnergy#LeagueChampions pic.twitter.com/DcdpPVO5tF

Hearts’ result against Liberty and Kotoko’s loss means that Hearts go into their final match of the season at WAFA in Week 34 with an insurmountable 4-point gap on Kotoko.