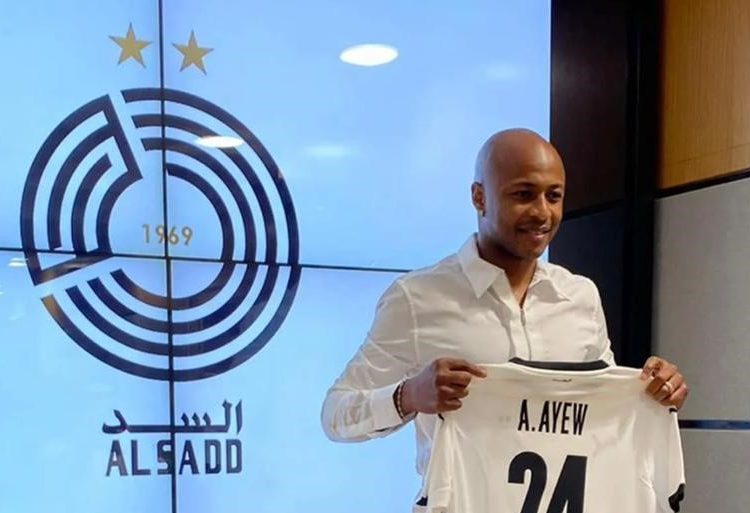 Black Stars captain, Andre Ayew has completed a move to Qatari champions Al Sadd. He was unveiled on Thursday night and will will wear the Number 24 jersey at his new club.

The 31 year old’s caused a social media storm, with many arguing the former Marseille man still has what it takes to play at the highest level, having been Swansea’s best player in the last two seasons, coming close to leading them to promotion.

It has now emerged Ayew indeed had the chance to play for Premier League clubs but chose a move to the gulf instead.

Brighton Hove and Albion had been in contact and offered wages in the region of £40,000 a week, an Improvement on the £30,000 they offered him the previous summer while Newcastle United manager Steve Bruce offered £60,000 a week one a year deal with an option for a second based on performance.

Both were well short of the reported $200,000 tax free Al Sadd offered, paving the way for the forward to move to the Oil rich nation.

The move brings down the curtains on an illustrious European adventure that has yielded 131 goals, 55 assists in over 400 appearances that cut across, France, England and Turkey.

Former Swansea star Ayew enjoyed a strong campaign in south Wales last season, scoring 17 goals on route to the Championship play-offs against Brentford in Wembley where they lost 2-0.

His immediate task will be helping Al Sadd retain their League title and put up a strong challenge for the AFC Champions League.

Ayew will also be hoping that he stays fit and on form ahead of the Africa Cup of Nations to be staged in Cameroon next January as his beloved Ghana go in search of their first trophy since 1982.

The Black Stars have reached the finals of the AFCON in 1992, 2010 and 2015 but have fallen short on all occasion and Ayew will be hoping that he’ll be the man to finally lead the team to end the 39 years of hurt.