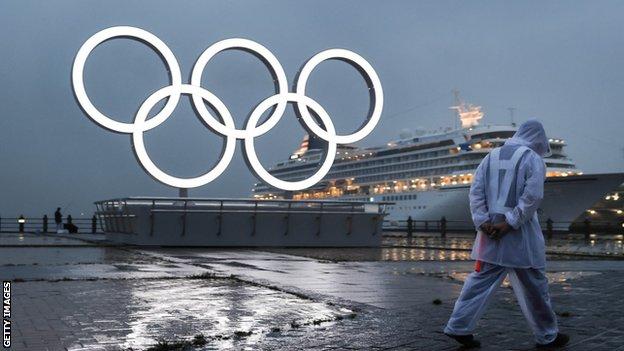 A tropical storm is expected to hit Japan on Tuesday but Olympics organisers have said it is unlikely to cause much disruption.

Rowing and archery events had already been moved but unless the forecast changes, there are no further plans to move any other events.

A typhoon had originally been forecast, but the storm has now been downgraded.

BBC Weather’s Matt Taylor said: “A weakening Tropical Storm Nepartak is approaching Japan, but should make landfall a reasonable distance away from Tokyo, further north and east across Honshu.

“It could still have impacts for the city though in spreading bands of intense rain, thunderstorms and gusty winds across the capital and the Olympic venues during Tuesday and Wednesday.”

Meanwhile, clarity has been given to competitors over masks and contact.

Athletes on the podium can remove their masks for photos, but celebrations involving close contacts are banned.

IOC spokesman Mark Adams said: “We will make a last big push to remind people and to get them to do their duty.

“If we find people who are breaking the rules, we will talk to them and ask them to abide by the rules. I think at this stage it’s where we are and I hope that works because this is a very important issue for us and everybody,” Adams said.