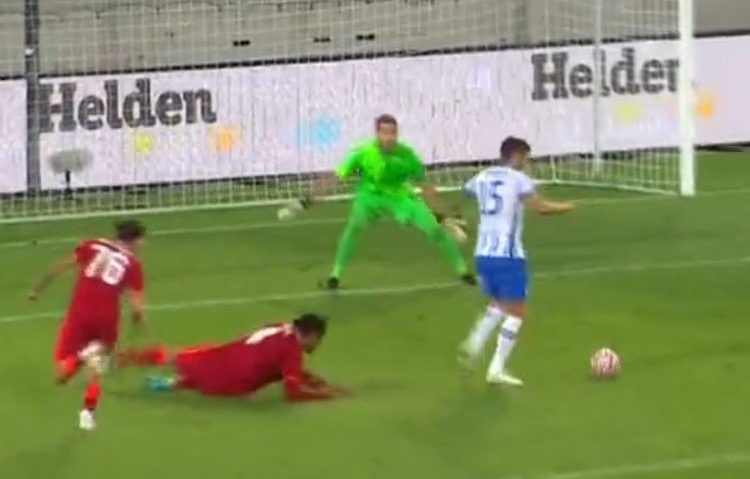 It was a positive night for Jürgen Klopp and his men despite a 4-3 loss to Hertha Berlin, as the return of Virgil Van Dijk promises a glimmer of hope for their title aspirations in the upcoming season.

The Dutch footballer marked a return to football after 285 days when he ruptured his ACL in a game against Everton in October 2020.

However, Van Dijk’s majestic return was soiled by a cheeky little trick that left him grazing, struggling to get up on his feet.

Impressively, the 30-year-old holds an enviable record of being one of the defenders who have had a handful of players getting past him.

As of June 21, 2020, only eight had gone past him since he joined Liverpool for £75 million in 2018 with Alexandre Lacazette (Arsenal), Mikel Merino (Newcastle United), Nicolas Pepe (Arsenal), Jay Rodriguez (Burnley), Bernardo Silva (Manchester City), Dele Alli (Tottenham Hotspur), Ruben Neves (Wolves) and Moussa Djenepo (Southampton) the only players to do so.

Virgil Van Dijk was introduced into the game with 20 minutes to go as part of Klopp’s plans to gradually ease him into his setup ahead of the new season.

But on the night of his return, Stevan Jovetić made sure the Liverpool centre-back was properly re-introduced to football when he floored him in the dying embers of the game.

The Hertha Berlin striker would go on to fire past Adrian after sending Andy Robertson flying.

🚨⚽️ | NEW: Van Dijk has been absolutely spun on his return to Liverpool pic.twitter.com/cjAabKqcLj

Liverpool fans will not be too worried as it was expected that the Netherlands footballer will be rusty slightly before the commencement of the 2021/2022 season.