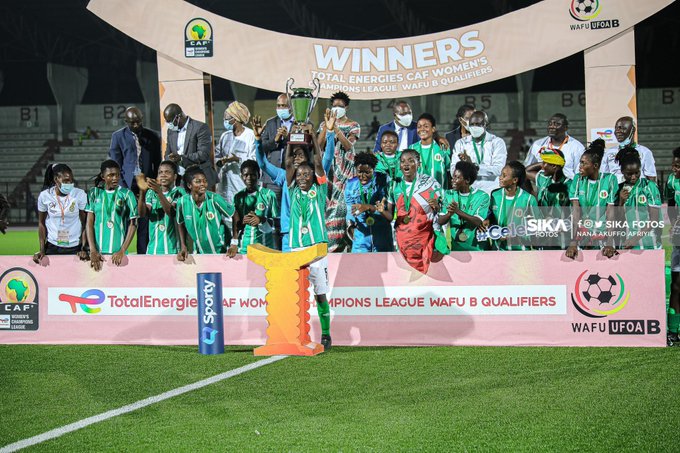 It’s a payback for Yusif Basigi’s side who lost their Group B opener 2-0 to the Nigerians.

Both teams already booked qualification for the first-ever Caf Women’s Champions League to be played in Egypt later this year by reaching the finals.

Veronica Appiah shot Hasaacas Ladies into the lead in under three minutes, pouncing on a defensive mishap for the opener.

Ikechukwu restored parity for Rivers Angels in the 9th minute after a similar defensive mishap from Hasaacas Ladies.

They failed to clear a setpiece properly from the left flank and she was quick to drive it into the net.

Perpetual Agyekum scored straight from a free-kick about 30 yards out in the 41st minute. Rivers Angels goalkeeper Whyte Ibubeleye failed in her attempt to push the ball over the bar and it dipped in time to enter the net.

Rivers Angels who have not lost in their three games in the competition prior to the final were down by two goals to one at the break.

Azumah Bugre put the game beyond the reach of Rivers Angels with Hasaacas’ third of the game three minutes to the hour mark. Bugre scored from outside the box with a ferocious shot to make it 3-1.

Both teams got good chances to have scored more but were not clinical in front of goal.

@HasaacasLadies are champions of the Wafu B qualifying tournament for the maiden Caf Women's Champions League!

A sweet payback to emerge champions of Wafu B. pic.twitter.com/j1lgGdN5Kv

Earlier in the day, Togolese side Amis Du Monde crashed Burkinabe side Union Sportive des Forces Amees 2-0 to take the third position but none will be playing in the final tournament in Egypt.