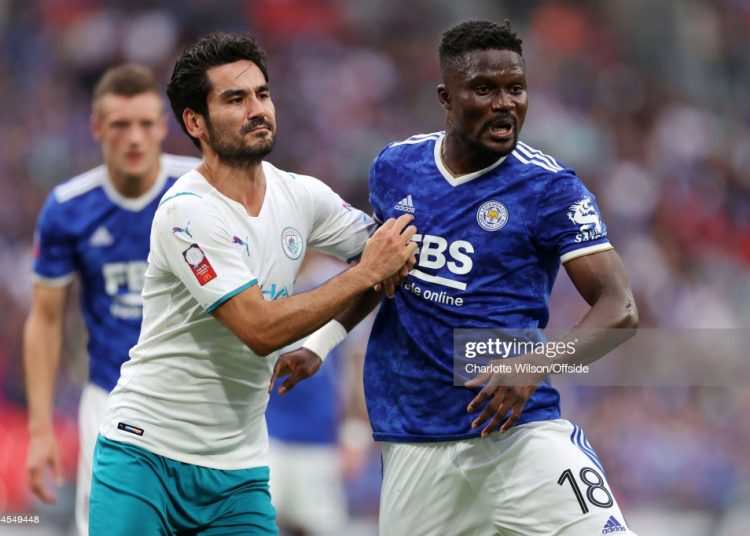 LONDON, ENGLAND - AUGUST 07: Ilkay Gundogan of Man City and Daniel Amartey of Leicester during the FA Community Shield match between Leicester City and Manchester City at Wembley Stadium on August 7, 2021 in London, England. (Photo by Charlotte Wilson/Offside/Offside via Getty Images)

The Ghana defender is having an outstanding start to the new season, after helping the Foxes win the Community Shield and earned an important opening day victory over Wolves.

Amartey was solid as the FA Cup winners kept two cleans sheets in those games.

However, the arrival of Jannik Vestergaard from Southampton in the summer transfer window has raised questions about Amartey’s position in the team.

But Rodgers is not in a haste to start Vestergaard ahead of the Ghanaian as they travel to West Ham on Monday night.

“We’ll see,” said Rodgers in a pre match conference. “I was pleased with him coming into the game last weekend. He showed his class and composure. He’s still obviously not up to speed, fitness-wise, but we’ll assess that over the next couple of days.

“Daniel Amartey has been outstanding in the games he’s played and he fills in a number of positions for us, but we’ll see where Jannik’s at in the next few days and take it from there.”