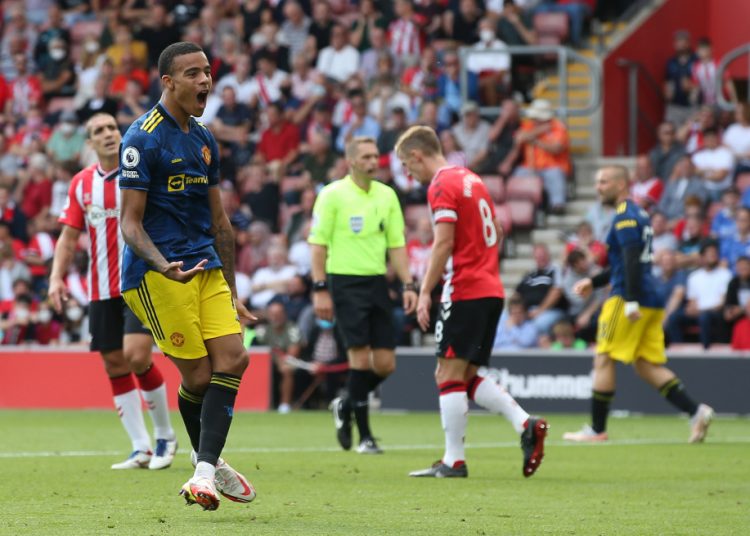 Manchester United’s strong away form continued as their 1-1 draw with Southampton made it 27 Premier League games unbeaten.

That equals the Premier League record set by Arsenal’s Invincibles back in 2004.

They were made to fight for it, though, with Southampton taking a first-half lead through a Fred own goal before Mason Greenwood levelled things up.

The Red Devils’ big summer signings Jadon Sancho and Raphael Varane were made to wait for their full Premier League debuts as they were named on the bench.

Ole Gunnar Solskjaer has plenty of attacking talent at his disposal, as was evident as he was able to bring Anthony Martial into the team in place of Dan James.

United settled the better after a bright start by the hosts with Bruno Fernandes’ free-kick causing a penalty box scramble, which ended with the ball coming back off the bar and Anthony Martial’s follow-up header being stopped on the line.

Despite United being the stronger team early on, the Saints took the lead in the 30th minute after Jack Stephens left Fernandes in a heap on the right.

The centre-back fizzed a ball across to Moussa Djenepo, whose first-time ball to Adam Armstrong was flicked on to Che Adams, who took a couple of touches and struck home from 20 yards via a deflection off Fred.

The Saints took that lead into the break before United levelled in the 55th minute.

Pogba poked a Fernandes ball on to Greenwood, whose shot beat Alex McCarthy and found the back of the net.

It was a fifth assist of the season for Pogba, but things were far from easy for Solskjaer’s side.

It was Southampton’s first point of the season and had chances to win the game.