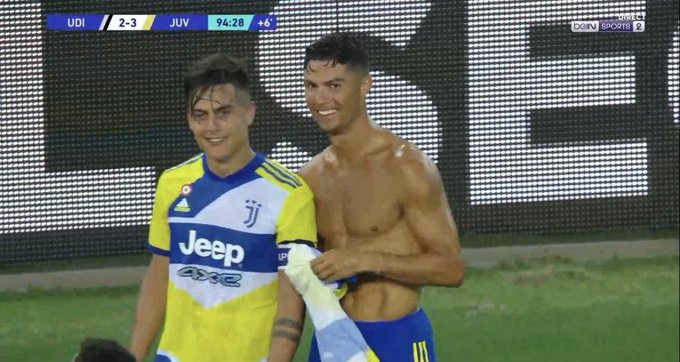 Cristiano Ronaldo was left out of Massimiliano Allegri’s starting XI as Juventus drew their Serie A opener against Udinese.

With ongoing speculation surrounding his future, reports suggested Ronaldo asked not to be picked.

But Juve director Pavel Nedved denied the rumours, insisting it was a “shared decision” not to start the five-time Ballon d’Or winner.

“He is absolutely staying at Juventus,” Nedved told broadcaster DAZN.

Ronaldo, 36, replaced Alvaro Morata on 60 minutes and thought he had headed in a stoppage-time winner from Federico Chiesa’s cross, only for the effort to be ruled out for offside by the video assistant referee.

Ronaldo removed his jersey and celebrated like he scored the winner in the UCL final only for the goal to be ruled out for offside😂😭😂😭😂 pic.twitter.com/NcVvVf2Wbl

Juve coach Massimiliano Allegri also played down the decision to start with Ronaldo on the bench, telling the same broadcaster: “Cristiano is OK.

“It’s the start of the season and seeing the condition everyone is in and thinking about the game, especially at the beginning, I put him on the bench knowing that there would be a need for him to come on.

“He made himself available, like everyone. He played well, even scored a goal but unfortunately it didn’t stand.”

Returning boss Allegri chose Morata to lead the line in a front three that also included Paulo Dybala and Juan Cuadrado, who were both on target.

Dybala opened the scoring inside three minutes, before Cuadrado doubled the lead with a low drive.

Roberto Pereyra pulled a goal back for Udinese with a penalty against his former club after goalkeeper Wojciech Szczesny’s clumsy lunge on Tolgay Arslan.

The hosts equalised in dramatic fashion as former Everton and Watford winger Gerard Deulofeu’s 83rd-minute strike stood after VAR overturned the on-field decision that had ruled it out.