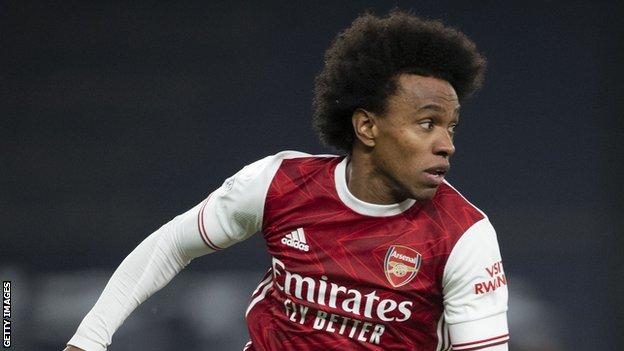 Willian has apologised to Arsenal fans for a disappointing spell at the club as he rejoins Corinthians.

The Brazil midfielder completed a move back to his home country after Arsenal terminated his contract on Monday.

“All my career I have done everything to be the best I can be – I always want to win and I find it hard to accept not doing so,” the 33-year-old wrote on Instagram.

“Unfortunately it didn’t happen for me at Arsenal and I am sorry about that.”

Willian arrived on a free transfer in August 2020 after leaving Chelsea, signing a three-year deal reportedly worth more than £200,000 a week.

However, the 70-time Brazil international hit back at critics who he felt had claimed his move to Arsenal had been driven by “financial reasons”.

“Unfortunately things on the pitch didn’t go the way we had all planned and hoped – I received a lot of criticism, especially from some members of the press, [suggesting] that I had come here for financial reasons,” added Willian, who scored one goal in 25 league appearances for Arsenal last season.

“I hope with my actions today [I] explain [that] to those people and they now understand that was not the case.

“I hope it teaches some people that they should not be so quick to pass judgement and create bad environments to make themselves important, even though I accept that’s part of the game.”

The midfielder, capped 70 times by Brazil, had not featured for the club this season. Gunners boss Mikel Arteta said before Saturday’s 5-0 defeat at Manchester City that he “didn’t know” why Willian’s time at the club had not been more successful.

Willian – who won five trophies, including two Premier League titles, during his seven-year spell at Chelsea – returns to his home country to join Corinthians, where he began his career before leaving for Shakhtar Donetsk in 2007.