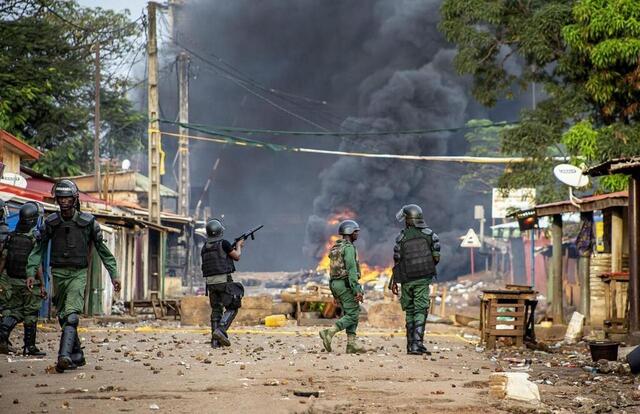 Morocco’s national team is trapped in Guinea, where they were set to play a World Cup qualifier on Monday, after an attempted coup took place in the capital Conakry on Sunday.

Soldiers appeared on national TV claiming to have dissolved the government, although the defence ministry said the attempted takeover had been thwarted by the presidential guard.

The fate of Guinea’s President Alpha Condé is unclear after an unverified video showed him surrounded by soldiers, after hours of heavy gunfire near the presidential palace.

Morocco coach Vahid Halilhodzic told L’Equipe in France that he had heard gunfire ‘nearly all day’ and that some of his players were worried.

Guinean journalist Cellou Diallo has told BBC Sport Africa that Morocco has received clearance from their embassy to travel to the airport, where the Moroccan federation’s plane is ready to evacuate the players.

Both the Morocco delegation, and the Cameroonian match officials, have been allocated an escort to the airport, he added.

“Guinea’s borders are currently closed, but the Moroccans and match officials have been given special authorisation to leave,” Diallo, who often reports for Canal+, added.

Both global body Fifa and the Confederation of African Football (CAF) have released a joint statement regarding the game.

“The current political and security situation in Guinea is quite volatile and is being closely monitored by Fifa and CAF,” it read. “To ensure the safety and security of all players and to protect all match officials, Fifa and CAF have decided to postpone the match.”