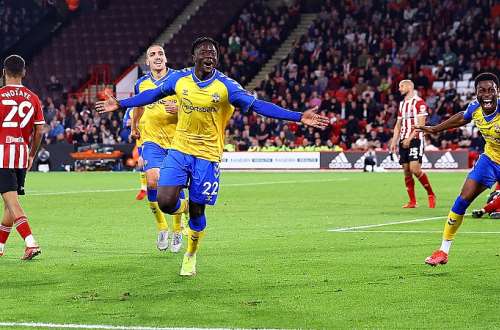 Ghanaian defender Mohammed Salisu has capped off his impressive start in the 2021/2022 season with his first Southampton FC goal in the Carabao Cup win against Sheffield United on Tuesday.

Southampton advanced to the next round after winning on penalties following a 2-2 draw with Sheffield United at the Bramall Lane in the EFL Cup.

The towering defender swept home a cross from Nathan Tella to give the Saints a 2-1 lead in the 53rd minute, having been behind earlier in the game.

French midfielder Ibrahima Diallo scored in the 23rd minute to cancel out Enda Stevens early goal for the home side.

Sheffield levelled matters through Ollie McBurnie in the 66th minute.

Salisu has been outstanding for the Saints since the beginning of the season including intriguing displays against Manchester United and Manchester City in the Premier League.

The 21-year-old has featured in all five matches in the Premiership and produced stellar performances.