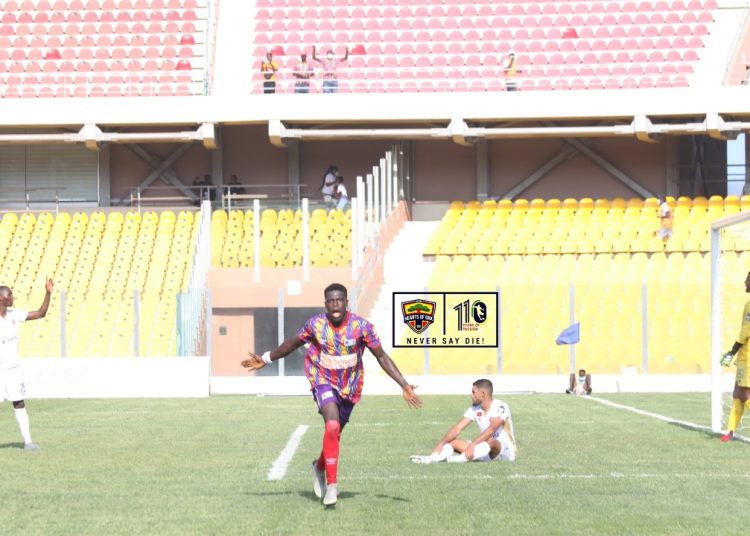 Accra Hearts of Oak recorded a 1-0 victory over Moroccan giants Wydad Athletic Club in Accra to secure a slim advantage ahead of the return leg of their CAF Champions League second round qualifying match in a week’s time.

Isaac Mensah’s first half strike was the difference in a highly competitive game in front of 2,000 fans approved by CAF to watch the game.

After a difficult opening first half hour, where the Phobians came under incessant pressure from the Moroccans, Samuel Boadu’s men turned on the screws in the last ten minutes before the half time break with a string of fascinating attacking moves.

Salifu forced a superb save from the WAC goalkeeper moments after Daniel Afriyie thought he should have had a penalty after being brought down by Tagnatoui in goal for WAC.

But it did not take long for Hearts of Oak to find the opening. Salifu’s inch-perfect cross from the left was connected on the volley from 6 yards out by Isaac Mensah, sending the fans in the Accra Stadium into rupture.

The first half ended with the 2000 CAF Champions League winners in the lead.

The second half started much the same way the first ended; with Hearts of Oak looking to double their lead.

Salifu was presented the best opportunity when Kofi Kordzi’s showed strength to fend of WAC defenders before laying the ball onto Salifu but the former Techiman Eleven Wonders midfielder sent his shot flying over the bar from 15 yards out.

Moments later, Kordzi himself then fired a vicious left footed strike into the near post but Tagnatoui was alert palmed it away from danger.

Boadu brought on Victor Aidoo and Agyenim Boateng to replace Salifu and Kordzi in search of their elusive second goal but a string of constant refereeing calls prevented the Ghana Premier League champions from building any sort of rhythm.

Late on, WAC found the back of the net but there was sigh of relief when the assistant referee flagged for offside.

Hearts of Oak will immediately turn their attentions to the second leg scheduled for next Sunday October 24 in Casablanca.

GET IN THERE ISAAC MENSAH 👊🏿 pic.twitter.com/P7CJoPdB2U