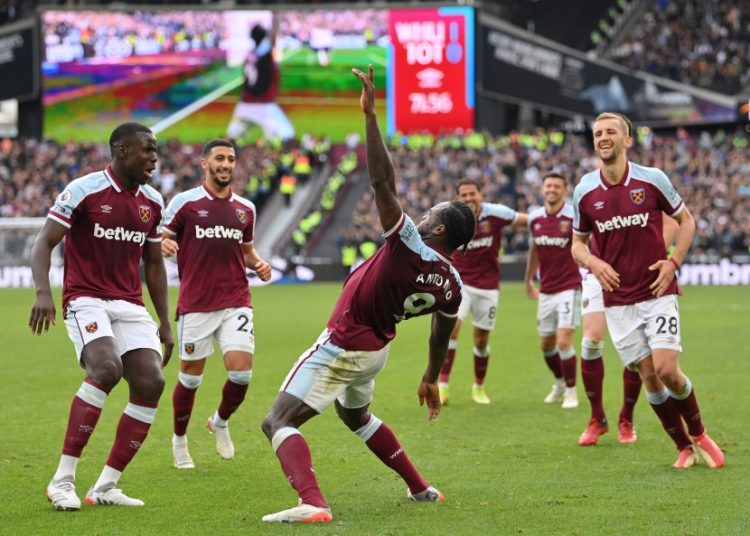 He was embarrassingly at fault as one-time rival for his England striking role Michail Antonio stabbed home yet another winning goal against Spurs.

Kane might have thought netting against Newcastle last week would lead to a glut of goals but he and his teammates delivered a truly toothless display against their rivals.

Bar a dominant spell towards the end of the first half Nuno Espirito Santo’s men offered nothing but pointless possession and failed counter attacks.

And in the end they were punished by Antonio, who now plays his international football for Jamaica, despite his six goals and three assists this campaign putting his opposite number to shame.

The icing on the cake for the Hammers star would have been beating Kane to the ball for his goal with the Tottenham man not even raising a leg as the ball fell in his direction.

Tottenham’s tepid start to the season continued at the London Stadium as they struggled to break down their hosts.

Dull football in midfield was occasionally interspersed with attempted switches of play, mainly to Sergio Reguilon, drifted aimlessly out of bounds.

All the while the Hammers offered a threat almost every time they reached the Spurs penalty area.

Pablo Fornals twice had Hugo Lloris sweating with shots, while Tomas Soucek nearly broke the deadlock with a backpost header.

The visitors could have had a penalty when Kurt Zouma clipped Tanguy Ndombele in the box, but VAR was unwilling to overturn the on-field decision.

Kane did at least prompt a super save from Lukasz Fabianski close to half time but that was his only meaningful contribution in the first 45 minutes.

When play resumed Tottenham spurned another good chance to take the lead when midfielder Oliver Skipp failed to make contact with another good ball from the bright Reguilon.

If Spurs’ play lacked energy, West Ham were the opposite and a frontline led by Antonio bristled any time the ball came near them.

The striker’s battle with Cristian Romero was a fine derby tussle over the 90 minutes.

Kane’s first-half header didn’t have the morale boost he might have been hoping for and when he should have laid the ball on plate for Heung-Min Son he put the ball straight into Fabianski’s arms.

Fornals again brought the best from Lloris after a rare Reguilon error as West Ham sought to punish profligate Spurs.

And from the corner the Hammers found the inevitable breakthrough.

Being marked by Kane, Antonio was found by the ball over from Cresswell and when the England striker was slow to react, his opponent fired home to embarrass him further.

It’s a result which will see Spurs manager Nuno come under increasing pressure given his side’s awful displays this season.

Combined with shocking 3-0 losses to Crystal Palace and Arsenal, as well as a poor showing in the home defeat to Chelsea, his future already looks in doubt just five months into his tenure.