Konadu happy with ‘frustration tactics’ against Hearts of Oak 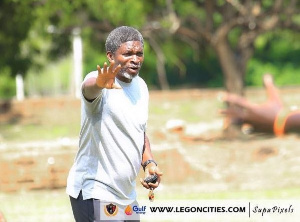 Head Coach of Legon Cities, Maxwell Konadu, has praised his side for their discipline in their impressive opening day draw against Champions Accra Hearts of Oak in the Ghana Premier League.

Legon Cities, who only secured their Ghana Premier League status on the final day of last season, put up a brilliant  defensive performance, and also had their goalkeeper Ofori Antwi to thank, as they held the Phobians to a 0-0 draw at the Accra Sports Stadium.

Maxwell Konadu revealed after the game, that he was delighted with the result, as his game plan was to frustrate Hearts of Oak.

“We came with a game plan, though not perfect, but we were able to hold them [Hearts of Oak] and frustrate them with our combination passes,” he said.

“It worked to some extent, because they decided to go long, and that’s when we started picking up the second balls and playing our game.

“We knew coming into this game that Hearts were already in competition. We made some mistakes, but they will be worked on. Overall I was satisfied with our output,” he added.