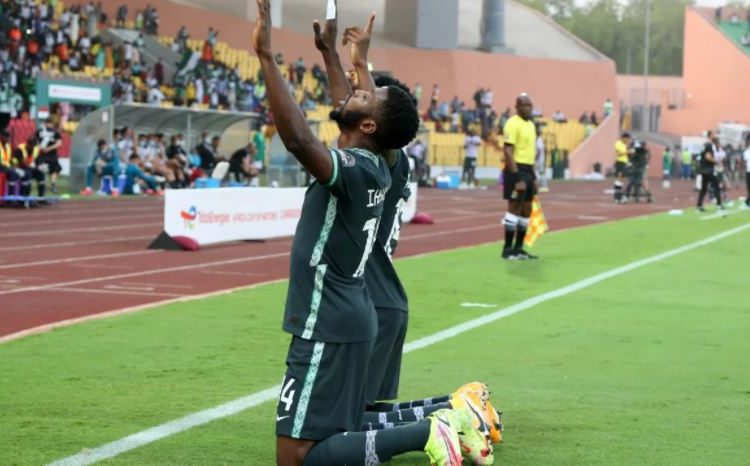 Nigeria got on the right foot in the 33rd edition of the TotalEnergies Africa Cup of Nations, Cameroon 2021, narrowly beating Egypt 1-0 thanks to striker Kelechi Iheanacho’s goal in the 30th minute in a clash filled with strong emotions.

After the scathing duel between Ghana and Morocco, held yesterday at the Ahmadou Ahidjo Stadium, today the day was reserved for another one, this time involving two other major African football nations, Nigeria and Egypt.

The nightmare night for Egypt began with an unfortunate first half for Al Ahly left back Akram Elhagrasi as he tried to disarm fast- and endive left-handed sniper Moses Simon (FC Nantes), and had to be replaced (Mohamed, 11 ́) after contracting an injury to his lower limbs.

The Super Eagles had already issued the navigation notice with the intentions demonstrated by gunner Moses.

In fact, when Moses was played 26 minutes again to be in the spotlight in an engaging counter-attacking move, in which he just did not score because the ball was bumping into the side netting of the Egyptian goalkeeper.

There was an offensive, creative and dynamic Nigeria in the organization of its game, in the face of a listless Egypt and stripped of solutions to counter the offensive saga of its opponent.

It was clear that Nigeria’s left flank was the most productive and that was where the goal came from, which was eventually scored by Kelechi Iheanacho in the 30th minute.

The team led by Nigeria coach Augustine Eguavoen, in addition to having the game in their control, completely dominated the match, starring in a real football spectacle that drove the crowd into delirium.

It was notorious the concern on the part of Portuguese coach, Carlos Queiroz, to see his team in the back and without solutions.

As the game moved to the end of the first half Kelechi Iheanacho (41 ́) again benefited from a superb opportunity to dilate the marker, but would fail the target. Moses took advantage of the final moments of the first leg to make a long pass into the great area, but with no one to follow up on the finish.

More were expected from Mohamed Salah, who, in addition to being on the side of the game, was heavily guarded by Nigeria’s defensive line. And it was with the advantage on the scoreboard that Nigeria went at half-time.

At the entrance to the second half the “Super Eagles” pulled back from the gallons. Much more consistent in the defensive and offensive process, only lacked even a greater objectivity when scoring. There were several scoring opportunities that remained to be taken advantage of by the Nigerian side.

Mo Salah’s non-conformism was notorious on both occasions (66 ́and 77 ́) that he tried to penetrate the opposite area. Egypt even awakened from deep sleep at a time when the curtains of the stage closed.