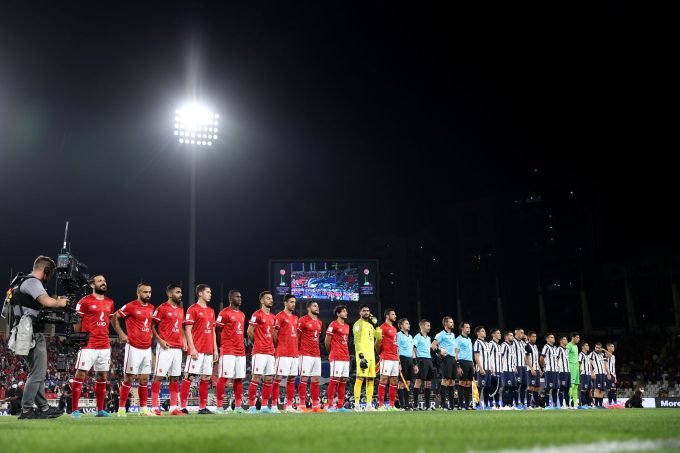 Taking part in the competition for the second year in a row, African champions Al Ahly had to enter the game without several of their key players as some of them are on international duty in the Africa Cup of Nations and another portion is out with injuries.

This coupled with the fact Al Ahly have a 100% losing record against Monterrey, made the Reds considered as an outsider for the game.

However, just a few hours before the clash, Al Ahly were handed a massive boost after head coach Pitso Mosimane had recovered from COVID-19 and was allowed to take charge of the game.

The South African made a surprising decision of starting youngster Mohamed Maghrabi, who had made his professional debut just a few weeks ago, while Taher Mohamed Taher started upfront as a sole striker.

The Mexican side seemed eager to score early on and they nearly did so after just two minutes when they took advantage of Afsha’s error; however, Funes Mori’s effort from the edge of the box went just inches wide of Ali Lotfi’s post.

But the response came quickly from Al Ahly as they launched a fast break counter-attack that ended in Hussien El-Shahat putting Ahmed Abdelkader through on goal, but he was denied by the keeper.

Monterrey kept dominating the game and missed several chances through Meza and Funes Mori as they couldn’t hit the target.

Relying on the counter-attacks, Al Ahly created two clear-cut chances, the first of which came as Ali Maaloul sent in a powerful cross which was met by Taher Mohamed Taher with a one-time touch, but the keeper was there to catch the ball.

However, the most dangerous chance of the half was when Hussein El-Shahat was put one-on-one with the keeper, who he dribbled past, before his effort was cleared off the line by the defence.

The start of the second-half saw Al Ahly piling up the pressure which paid off in the 51st minute through a stunning strike from Mohamed Hany.

Mohamed Magdy Afsha found Maaloul on the left with a smart pass, before the Tunisian sent in a low cross, which was parried away by the keeper, but only as far as Mohamed Hany, who needed just one touch to find the back of the net from outside of the box.

Trying to find the equaliser quickly, Ali Lotfi was put into test for the first time in the 55th minute as he brilliantly turned Funes Mori’s header into a corner.

After 62 minutes of brilliance, Maghrabi was forced off due to an injury and was replaced by Karim Fouad as Al Ahly had no centre-backs on the bench.

Abdelkader and Hussien El-Shahat were also brought off for Luís Miquissone and Walid Soliman in the 73rd and 78th minutes respectively.

Monterrey had more of the ball, but couldn’t create any real chances and Ali Lotfi had no saves to be made, while on the other hand Walid Soliman had the chance to kill off the tie.

Moreover, Al Ahly had to survive a late scare as the Mexican were awarded a free-kick on the edge of the box in the aggregate times, but ex-Arsenal forward Joel Campbell fired his effort well wide.

The remaining minutes didn’t witness much as Al Ahly held to their one-goal lead and secured a historic victory to reach the semi-finals of the Club World Cup.

Pitso Mosimane’s men will now face COPA Libertadores champions Palmeiras, who they had beat in the previous year in the third-placed playoff.

2022 FIFA U-20 WWC: Black Princesses through to last round of qualifiers after Uganda thrashing

2022 FIFA U-20 WWC: Black Princesses through to last round of qualifiers after Uganda thrashing