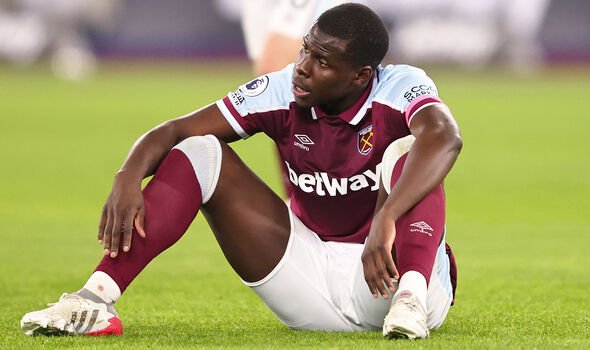 West Ham’s Michail Antonio has questioned the reaction to the Kurt Zouma cat-kicking incident, saying: “Is it worse than players convicted of racism?”.

Zouma’s cats have been taken away by the RSPCA after a disturbing video emerged of him hitting, dropping, and kicking his pet across his kitchen floor on Monday.

The 27-year-old West Ham defender issued an apology but Essex Police confirmed “urgent enquiries” were underway in conjunction with the RSPCA.

West Ham have fined Zouma two weeks wages – understood to be £250,000 – which will be donated to animal welfare charities, while Adidas have dropped the player as a client.

In France, animal rights group the 30 Million Friends Foundation condemned the “heinous act” and called for Zouma to be suspended from the national team.

Asked about the reaction to the Zouma situation, Antonio responded: “I’ve got a question for you. Do you think what he’s done is worse than racism?”

“I’m not condoning a thing that he’s done. I don’t agree with what he has done at all.

“But there’s people that have been convicted and been caught for racism, and have played football afterwards. They got an eight-game punishment or something like that, but people are now calling for people to be sacked and to lose their livelihood.

“I’ve just got to ask this question to everyone out there: is what he’s [Zouma] done worse than what the people convicted of racism done?”

West Ham initially condemned Zouma’s actions after the video emerged but backed manager David Moyes’ decision to start the player for the win against Watford on Tuesday night.

Moyes has said Zouma would remain available for selection while the club’s internal investigation ran its course.

“Our priority is and has always been the wellbeing of these cats,” an RSPCA spokesperson said.

“They’ve been taken for a check-up at a vets and then will remain in our care while the investigation continues.

“We’re grateful to everyone who expressed their concern for these cats. We were dealing with this issue before the video went viral online and are leading the investigation.

“We continue to investigate so we cannot comment further at this time.”

West Ham United confirmed the club is continuing to support an RSPCA investigation.