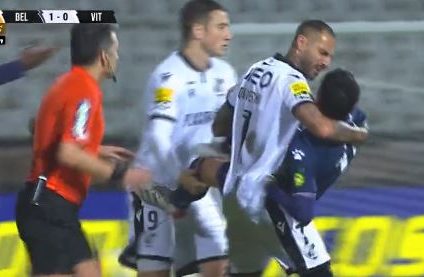 When Belenenses midfielder, Afonso Sousa fell to the pitch late in their match against Vitoria Guimares with his side 1-0, he would have thought he could eat up a few minutes on the clock.

However, Guimares forward, Ricardo Quaresma had other ideas.

Desperate to get on with the game and possibly help his team find an equaliser, and also frustrated by Sousa’s antics, the former Porto and Chelsea player took action.

He bent down and picked up Sousa off the ground and carried him towards the touchline.

Sousa barely fought Quaresma off initially, as he was probably shocked by what was going on.

Eventually, Sousa’s teammates came to his aid and he finally wrestled himself free of Quaresma’s grasp.