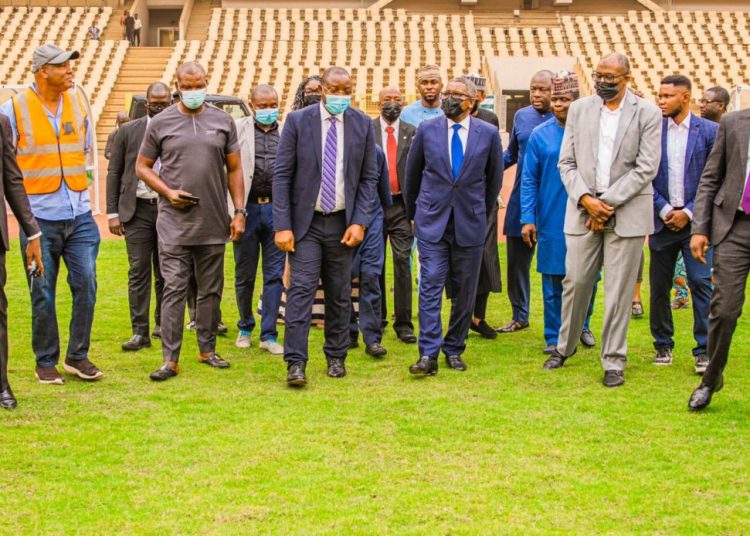 0
SHARES
699
VIEWS
Share on FacebookShare on TwitterShare via Whatsapp

Africa’s wealthiest person was visiting the stadium this week to see how senior Nigerian officials are preparing the stadium to host the country’s biggest game when they take on the Black Stars.

The Moshood Abiola Stadium is where the Super Eagles of Nigeria will host the Black Stars of Ghana in the second-leg of the 2022 World Cup playoff match in 29 March.

Dangote, an ardent football fan and supporter of the Super Eagles, fully paid for the Moshood Abiola Stadium to be renovated  under the Ministry of Youth and Sports’ ‘Adopt-a-Pitch program’.

The billionaire was accompanied by Nigeria’s Sports Minister Sunday Dare as they witnessed how the money has been deployed to bring the stadium up to the standard required globally to host top notch matches.

Dangote inspects the Abuja Stadium for the clash against GhanaDangote’s firm, Dangote Industries Group, sponsored the reconstruction of the field and other facilities to ensure that it is in top shape for the match against Ghana and beyond.

He was pleased of the work done while he walked around the pitch , with sprinklers that were working flawlessly as well as the two digital scoreboards that were beaming live.

In his remarks, Dangote assured the Sports Minister of his continued support to develop not only the Abuja Stadium but also other facilities. “You can be rest assured of our continued support. You can always knock on our doors,” Dangote said.

“We shouldn’t allow our Stadia to collapse. Nigerians have a very strong love for Sports, so I think we need to complement Government’s efforts to ensure that everything works,” he added.

The Minister expressed appreciation to Dangote for accepting to adopt the Moshood Abiola Stadium, stating that he was the first to embrace the Ministry’s Adopt-a-Pitch initiative.

“I want to thank you for investing in the development of our Sports and the fruit of that partnership has blossomed into what we see here today,” the Nigeria sports minister told the billionaire.

“I would like to inform you that we have just received CAF certification of this Stadium for international matches, which means that the World Cup qualifiers, will be played here. This wouldn’t have been possible without your support,” Dare emphasized.

The newly renovated Moshood Abiola Stadium has been completed with nursery beds, two digital score boards, 24 Sprinklers and two-year maintenance, as part of the contract sponsored by Dangote Industries.

The move by Dangote is under the Adopt-a-Pitch Public Private Partnership initiative of the Ministry where the country’s finest are courted to help revamp existing stadia.

Daura Stadium Katsina has also been completed, while National Stadium Lagos amongst others have been adopted, and are at different stages of completion.

2022 WCQ: FIFA to deploy VAR for Ghana vs Nigeria clash

2022 WCQ: FIFA to deploy VAR for Ghana vs Nigeria clash