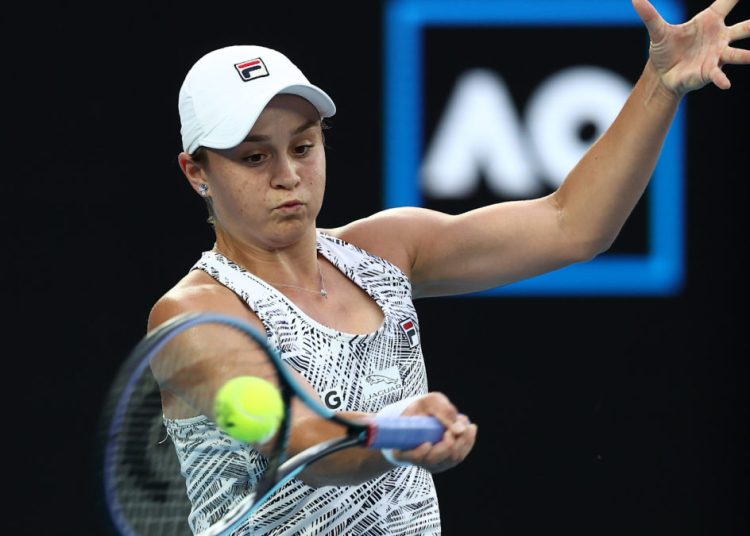 MELBOURNE, AUSTRALIA - JANUARY 23: Ashleigh Barty of Australia plays a forehand in her fourth round singles match against Amanda Anisimova of United States during day seven of the 2022 Australian Open at Melbourne Park on January 23, 2022 in Melbourne, Australia. (Photo by Mark Metcalfe/Getty Images)

World No 1 Ashleigh Barty has announced her shock retirement from professional tennis at the age of 25.

The Australian, who has won three Grand Slam titles and is the reigning Wimbledon and Australian Open champion, said she was retiring from the sport for a second time to “chase other dreams”.

Barty made the announcement of her retirement in an Instagram video recorded with friend and former doubles partner Casey Dellacqua.

“I kind of wasn’t quite sure how I was going do this but I think so many times in my life both my professional and my personal, you’ve been there for me,” Barty told Dellacqua.

“And I just couldn’t think ‘there’s no right way, there’s no wrong way’. It’s just my way and this is perfect for me to share it with you to talk to you about it with my team, my loved ones, that I’ll be retiring from tennis.

“And so first time I’ve actually said it out loud and yeah, it’s hard to say, but I’m so happy and I’m so ready and I just know at the moment in my heart for me as a person, this is right.”

Barty spoke of how winning Wimbledon – the first time an Australian had claimed a singles title at the Championships in nearly 20 years – in 2021 was the culmination of her “one true dream”.

It proved life-changing for the right-hander too and her voice broke as she told Dellacqua retirement was something she had been considering for a long time.

“I’ve had a lot of incredible moments in my career that have been pivotal moments,” Barty said. “Wimbledon last year changed a lot for me as a person and for me as an athlete when you work so hard your whole life for one goal, and I’ve been able to share that with so many incredible people.

“But to be able to win Wimbledon, which was my dream, my one true dream that I wanted in tennis, that really changed my perspective.”

Barty promised in the caption to the video there would be “more to come” at a press conference.