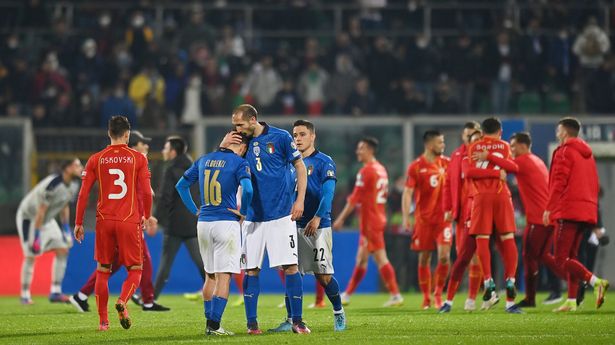 Italy missed out on a second consecutive World Cup after losing 1-0 at home to North Macedonia, with Aleksandar Trajkovski scoring the winner in second-half stoppage time.

European champions Italy did not qualify for the World Cup four years ago, their first failure to reach the tournament since 1958, but they dominated from the off in Palermo and looked on course for victory.

The hosts became more desperate in their search for a winner after the break as chances continued to come and go before, in stoppage time, Trajkovski arrowed in a stunning winner to spark wild North Macedonian celebrations.

Roberto Mancini’s Italy side had 32 efforts at goal in the match, but somehow fell short, with North Macedonia going on to play Portugal in the play-off final on Tuesday for a place at the World Cup.

“I don’t know why we haven’t been able to do this, I am also involved in this, and it hurts me to think about it.”

Without veteran pairing Leonardo Bonucci and Giorgio Chiellini through injury, Italy’s makeshift defence was barely troubled in the first half, as all the action took place down the other end.

Domenico Berardi had the best of the openings having been presented with the ball after North Macedonia goalkeeper Stole Dimitrievski misplaced a pass, but the Sassuolo forward’s shot was tame, with Dimitrievski getting back to make the save.

Ciro Immobile also wasted a glorious first-half chance for Italy when blazing over the bar from a good position. Berardi was again guilty of profligacy after the break, shooting over when he should have hit the target.

As the match wore on, Italy nerves kicked in and their finishing became more erratic. Mancini shuffled his pack, giving Cagliari striker Joao Pedro his debut, but with their only meaningful attack of the match, North Macedonia seized their chance.

Italy did not look to be in too much danger, but Trajkovski, who plays in Saudi Arabia for Al-Fayha, had other ideas, writing his name into North Macedonian folklore with a shot that crept inside the post to stun the home fans.

2022 WCQ: “We know Ghanaians are skeptical about the team but we have a plan” -Otto Addo

2022 WCQ: "We know Ghanaians are skeptical about the team but we have a plan” -Otto Addo