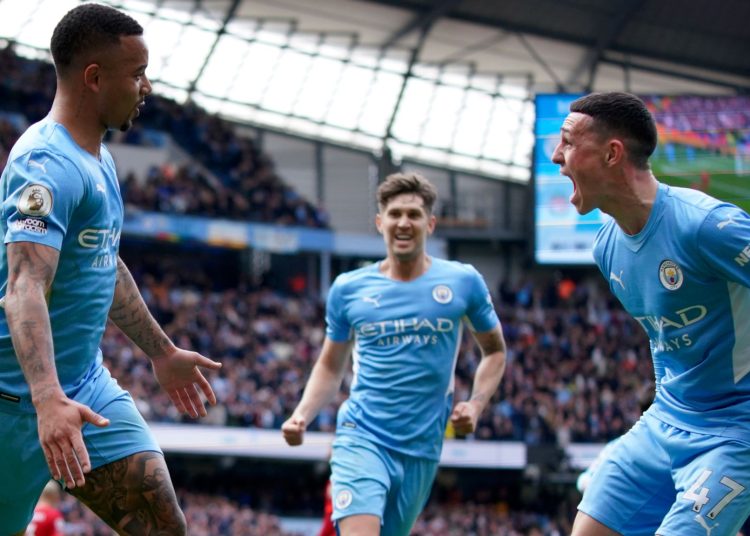 0
SHARES
31
VIEWS
Share on FacebookShare on TwitterShare via Whatsapp

Liverpool came from behind twice in a thrilling 2-2 draw with Manchester City at the Etihad Stadium that leaves the Premier League title race still on a knife edge.

Amid a raucous atmosphere in a game that had been billed as a title decider, Kevin De Bruyne and Diogo Jota traded goals early on before Gabriel Jesus restored City’s lead.

But Sadio Mane found a second equaliser for Liverpool early in the second half and though both teams pushed for the winner, it is as you were in the title race – City ahead by a point.

Raheem Sterling had spurned a clear chance even before De Bruyne’s shot deflected off Joel Matip and into the corner in the sixth minute, as the game came alive from the kick-off.

Pep Guardiola’s side was the dominant force throughout the first half, playing with great intensity, but the quality of Jurgen Klopp’s side ensured there was always danger.

Jota’s goal made that clear, laid into his path beautifully by Trent Alexander-Arnold’s cushioned volley. It silenced the home support – but not for too long.

Gabriel Jesus was in a Premier League starting line-up for the first time since New Year’s Day and the decision was vindicated when the Brazilian was on the end of Joao Cancelo’s angled ball into the penalty box to divert his shot beyond Alisson.
It was City who went into the interval ahead but the lead did not last long, Mohamed Salah setting up Sadio Mane to level things up within moments of the restart.
Raheem Sterling thought he had found a way midway through the second half only to see his goal ruled out as a result of a narrow offside decision.
There was still time for Mahrez to attempt an ambitious chip in stoppage time with the goal right in front of him only to see it sail over the bar.
Source: Sky Sports
Tags: Diogo JotaGabriel JesusJoao CanceloKevin De BruyneLiverpoolManchester CityMohammed SalahPremier LeagueSadio ManeTrent Alexander-Arnold
Previous Post