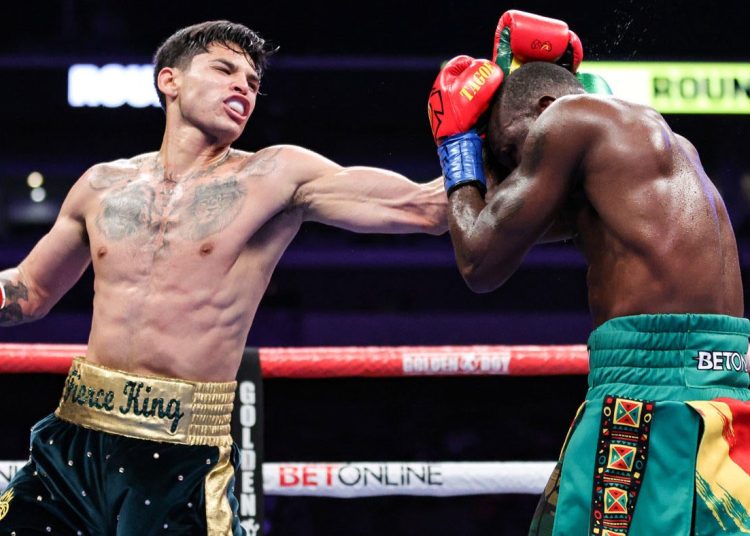 0
SHARES
2k
VIEWS
Share on FacebookShare on TwitterShare via Whatsapp

Ghanaian boxer, Emmanuel ‘Gameboy’ Tagoe, made a losing return to the ring after being dominated by Ryan Garcia in a unanimous decision defeat to the American.

The celebrated ring return of one of boxing’s rising young stars saw the 23-year-old lightweight contender end a career-long 15-month layoff with a near-shutout win over Tagoe. Judges Tom Carusone (119-108), Lisa Giampa (118-109) and Ellis Johnson (119-108) all ruled in favor of Garcia, who went the twelve-round distance for the first time in his career in the DAZN main event Saturday evening in front of a passionate crowd of 14,495 at Alamodome in San Antonio, Texas.

“I had to walk him down, he wasn’t giving me anything,” Garcia admitted of Tagoe’s negative approach to the fight. “I’ll learn more, I know I got a lot more in me.”

Tagoe spent much of the opening round fighting from the outside, using constant lateral movement but to the detriment of sacrificing his offense. Garcia quickly closed the gap, connecting with a right hand late in the round and drawing raucous cheers anytime the Victorville, California native threw a punch.

Garcia was warned at the end of the round for hitting on the break, though quickly gaining his composure as he made his way back to the corner. Awaiting with instructions was new head trainer Joe Goossen, decked out on a custom-made denim outfit for the occasion, branded with Garcia’s Fierce King gym name where the two set up shop more than seven weeks ago.

It marked the first time in more than three years that Garcia entered a fight without the services of Eddy Reynoso, having split from his camp shortly after the fight was announced in early February. The two enjoyed five knockout wins together, though Garcia didn’t appear to miss a step even with a new team and following a fifteen-month layoff.

Garcia scored the first knockdown of the fight late in round two. A right hand had Tagoe on wobbly legs, with a follow-up right hookercut sending him to the canvas. Tagoe beat the count but immediately clinched after an ensuing attack by Garcia as he struggled to regain his legs.

Momentum remained with Garcia in round three. The unbeaten lightweight cracked Tagoe with a crisp right hand to the body. Tagoe managed to stay on his feet for the duration of the round, though largely doing so by playing keep-away as Garcia was responsible for all of the offense.

Tagoe was in trouble early in round three, as Garcia connected with a right hand upstairs. Tagoe immediately wrapped his arms around Garcia’s waist as he pitched forward, before proceeding to circle the exterior of the ring.

Garcia patiently stalked the Ghanaian lightweight in round four, landing a right hand and left hook along the ropes. Tagoe responded with a right hand that was partially blocked, initiating a brief exchange with Garcia getting the much better of the action.

A more direct approach was taken by Garcia in round five, immediately cornering Tagoe and letting loose with a left hook and right hand. Tagoe would enjoy his best moment of the fight later in the round, connecting with a right hand over the top. Garcia shrugged off the blow, firing off a right and left to the body and to the delight of his adoring crowd.

Even Garcia’s most fervent supporters began to grow restless at the slow pace of the fight, to no fault of the 23-year-old lightweight as he carried the action throughout the night, Tagoe’s defensive-minded effort was not for this fight town, nor did it serve well to keep Garcia at bay as he found himself under siege in round seven, Garcia didn’t wase any punches, connecting with one-twos, resetting and landing to the body before looking for the next opening.

Garcia did his part to minimize the boos in round nine, landing with straight shots upstairs in the first minute of the round. Tagoe briefly responded at the midway point before shutting down and doing his best to avoid the incoming, Garcia landed lead right hands, catching Tagoe on the temple only to be met with a clinch. Garcia connected with a short left hook, but missed wildly with an overhand right near the end of the round.

Tagoe was in trouble midway through round ten as Garcia connected with a right hand. Garcia had Tagoe pinned along the ropes, with Tagoe falling to the canvas through ruled a push by the referee. Garcia continued to stalk but was extended to the bell.

Garcia entered the eleventh round of a fight for the first time in his career, having twice before gone the ten-round distance. The latter of the two was a ten-round majority decision over Carlos Morales in September 2018, in a performance that prompted the switch to Reynoso. There was significantly less concern of the scoring being in doubt on Saturday, even any outcome other than a knockout was welcomed by Garcia.

That moment would never come. Tagoe was content with going the distance, though suffering defeat for the first time since his pro debut nearly eighteen years ago, when he was just 15 years old. The 32-fight win streak comes to a close, as Tagoe falls to 32-2 (15KOs).

Garcia advances to 22-0 (19KOs) with the win. Attendance-wise, his return was as celebrated as his seventh-round knockout of England’s Luke Campbell last January 2 in Dallas. From there came a mental health reset which forced his withdrawal of a July 9 fight with Javier Fortuna. A seemingly locked-in November 27 date with Joseph Diaz Jr.—who was ringside on Saturday—ended with Garcia pulling out after suffering a right hand and wrist injury requiring surgery.

“It’s probably a little bruised right now, but I kept throwing it. It feels good.”

As for what’s next, Garcia chose growth over glamour. The past year was spent calling out the biggest names at lightweight and even a dream fight with Manny Pacquiao. None materialized, nor did any other for the rest of the year.

As he continues to obtain knowledge in the ring, Garcia has also learned from his mistakes on the other side of the ropes.

“I don’t want to call anyone out,” admitted Garcia after being asked to revisit plans for a superfight with Baltimore’s Davis (26-0, 24KOs) who next faces Rolando Romero on May 28. “We already did that and those fights didn’t happen. I don’t want to lie to y’all. I just want to learn from this and move on. If the fight happens, it happens.”