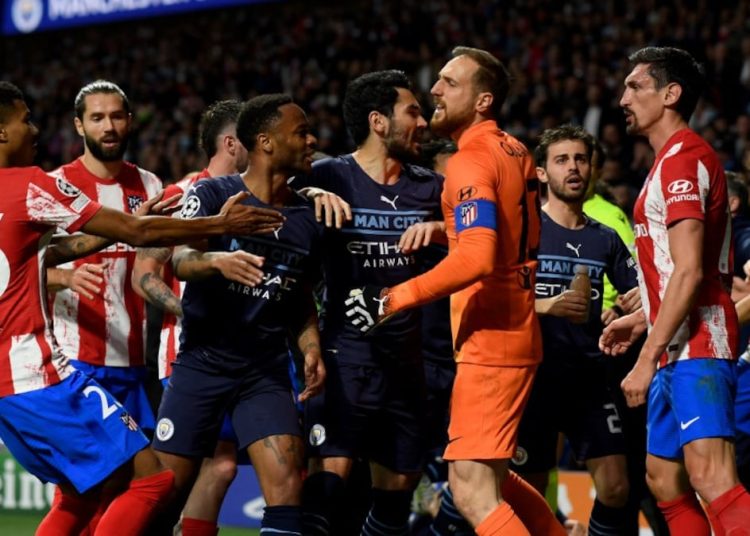 0
SHARES
83
VIEWS
Share on FacebookShare on TwitterShare via Whatsapp

Manchester City and Atletico Madrid players were involved in an on-pitch brawl and post-game tunnel altercation in a hot-tempered Champions League quarter-final.

Sources indicate that UEFA are likely to take disciplinary action over events at the end of the game.

A challenge from Atletico’s Felipe on City’s Phil Foden provoked a melee between the two sets of players in the 89th minute.

Felipe was shown a second yellow card by referee Daniel Siebert, while Nathan Ake and former City defender Stefan Savic were also cautioned after the incident

Broadcast images appeared to show Savic in conversation with Jack Grealish, with the Montenegrin seemingly grabbing the City man by the hair. Savic then appeared to headbutt Raheem Sterling.

City’s Joao Cancelo and Atletico head coach Diego Simeone were seen arguing after the match on the pitch, following the nine minutes of added time that were played.

Footage from a French broadcaster appeared to show a mass altercation between players and staff from City and Atletico, with an object thrown by Sime Vrsaljko towards Aymeric Laporte and members of the away side’s backroom team.

Vrsaljko then had to be held back as the players and staff headed into the concourse, with Kyle Walker, who had been taken off due to injury during the second half, also restrained.

Grealish, an unused substitute on the night, had been on the end of several strong challenges during last week’s first leg, with Vrsaljko booked late on.