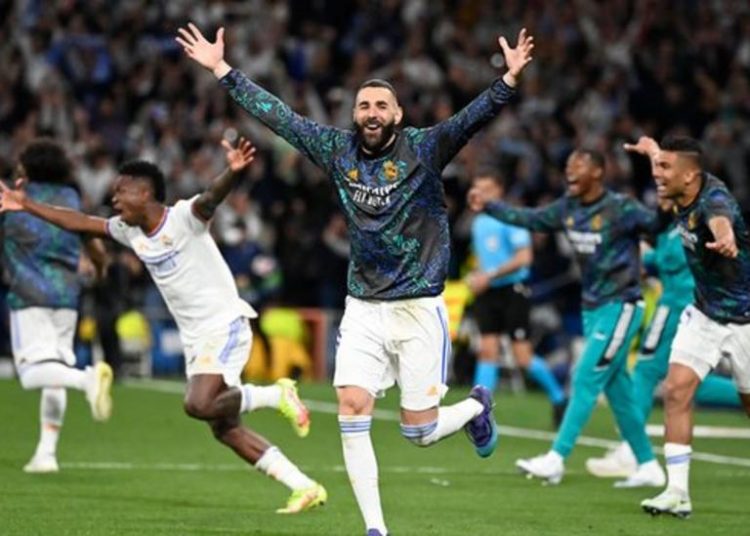 Manchester City suffered one of the most remarkable Champions League collapses as Real Madrid came back from the abyss to set up a final showdown with Liverpool.

City were two goals ahead on aggregate going into the 90th minute after Riyad Mahrez’s strike had added to their 4-3 first-leg win last week.

And then Rodrygo happened.

And 90 seconds later he levelled the tie with a header into the top corner after Marco Asensio flicked on Dani Carvajal’s cross.

That sent an already rowdy Bernabeu into absolute euphoria.

City, who thought they were going through to a second consecutive all-English Champions League final, were shell-shocked.

Both sides had chances to win the tie before the full-time whistle. Ederson denied Rodrygo a quick-fire hat-trick and then an unmarked Phil Foden fired over inside the box.

And so to extra time the game went – and it was Real who got the decisive goal in maybe the greatest Champions League semi-final ever.

Benzema beat Ruben Dias to a loose ball in the box and was brought down by the City defender. He stepped up to take the penalty himself and scored his 43rd goal of the season. There is no doubt it is the most important.

Real’s Thibaut Courtois, who was by far the busier keeper, tipped away Foden’s header with Fernandinho inches away from scoring the rebound – but City could not find a goal to send it to penalties.

That sets up a repeat of the most memorable Champions League final of recent years, when Real beat Liverpool 3-1 in 2018.

For City and manager Pep Guardiola now, the Premier League title – they sit one point above Liverpool with four games to go – is their only target.