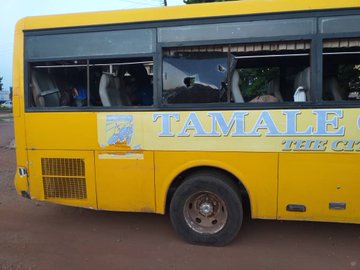 Tamale City FC forward Mohammed Alhassan says he and his teammates are traumatized from the ordeal of having their team bus attacked by fans of the Baffour Soccer Academy.

Players and technical team members of the Division One League side were attacked at the Twumasi Sports Complex at Nsoatre following their 1 – 1 draw against Baffour Soccer Academy.

Fans of the home team after barricading all exits to the park pelted the team bus of Tamale City FC with stones, leaving many injured.

Speaking to Citi Sports on the incident, Alhassan stated clearly that the team is not in the right frame of mind to play football.

“We are not in the frame of mind to play football now because for most of the guys they have never experienced something like this.

I am a former player of Asante Kotoko and the same incident happened in 2013 when we played Berekum Arsenal.

It was a life and death experience with a speeding bus swaying left and right with stones flying through the window and glass everywhere.

Most of the guys could not even sleep because at 2:00am we were still awake

I honestly don’t think we are in the state of mind to play that match on Wednesday against Bofoakwa,” he revealed.

Some players and technical team members are still receiving treatment for the cuts and bruises suffered.

WAFU Zone B: The weather in Niger affected our performance against Nigeria – Zito