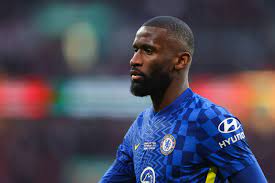 Chelsea defender Antonio Rudiger has agreed a four-year deal to join Real Madrid on a free transfer in the summer.

The Germany international’s Chelsea contract expires at the end of the season and Blues boss Thomas Tuchel revealed last month the defender had decided to reject a new deal at Stamford Bridge.
A number of clubs across Europe – including in the Premier League – were interested in Rudiger. However, Real were the first club to formally express an interest in signing him this summer, and the 29-year-old is thought to be flattered and impressed by Real’s pursuit.
Remaining at Chelsea was a possibility for Rudiger, but the sanctions placed on the club’s owner Roman Abramovich made talks over extending his deal impossible.
Source: Sky Sports
ShareTweetSend
Previous Post